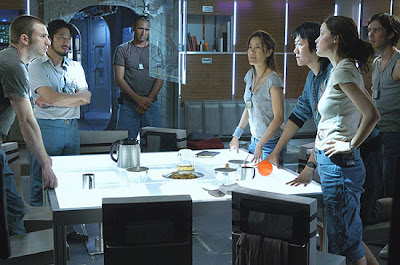 
Michelle Yeoh, one of the finest Asian actresses in the film business, will be starring in Sunshine, a sci-fi feature with a March 16, 2007 release date. Current predictions of global warning be damned, the film takes as its premise that the sun starts to die around the middle of the 21st Century. Seven years after an attempt to revive the sun fails, a second team is sent to try again. As Corazon, Michelle is one of the eight astronauts upon whom Earth's final hope for survival rests. The film is directed by Danny Boyle (28 Days Later, Trainspotting), so it's obviously in good hands in that regard.

Born in Malaysia in 1962, Michelle spoke English and Malay before Chinese. She trained as a ballet dancer in England, later won the Miss Malaysia beauty pageant, and began appearing in Hong Kong movies in the mid-'80's under the name Michelle Khan. In 1988 she married Dickson Poon, a wealthy executive at D&B films, and retired from acting. (Marrying a wealthy man and retiring at the height of one's career was common practice for Hong Kong actresses.) She returned to film-making after their divorce in 1992.

Never trained as a martial artist, she has used her experience as a dancer for fighting sequences, as Ziyi Zhang also would in subsequent years. Michelle does most of her own stunts and has been injured several times, once very seriously in a fall while preparing for a scene. See her more than hold her own with Jackie Chan in Police Story 3: Super Cop.

Also well worth watching is Wing Chun (1994); some of her moves are beyond incredible. For a triple treat of Asian ladies, see Heroic Trio and it's nominal "sequel" Executioners. Both of these fun films were made in 1993 and star Michelle, Maggie Cheung and the late Anita Mui. And of course, there's Crouching Tiger, Hidden Dragon, which is not only not to be missed but should be viewed periodically over time. In my opinion, it's right up there with The Seven Samurai as the greatest Asian film ever made.

Sunshine is only Michelle's second non-Asian film (since I consider Memoirs of a Geisha to be "Asian" in theme, even though it's spoken in English). Her first Western film was 1997's Tomorrow Never Dies. Now I've been a fan of the Bond films since Dr. No, and I think very highly of the four in which Pierce Brosnan starred. But let's be clear: it was so obvious in Tomorrow Never Dies that Michelle Yeoh could so kick his butt!

At this point in her career, it seems likely that Michelle will looking for more dramatic roles and phasing herself out of the hard core action/martial arts genres. Here's hoping that Sunshine will assist her in that transition and that it'll open doors to other non-Asian-themed films for her. At the same time, I hope we'll be blessed with at least a few more flicks of her layin' down some bad Asian whup-ass action! 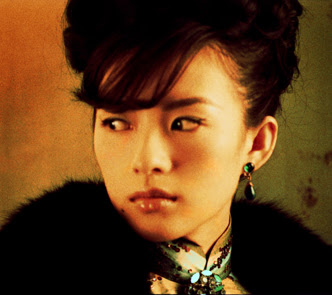 This talented and extremely gorgeous Asian actress was born in Beijing, China on February 9, 1979, making her 28 years old today. A graduate of the Central Drama Academy, the top acting college in China, Ms Zhang had only one appearance on Chinese television in 1996 prior to her first film role in Zhang Yimou 's The Road Home [1999]. Billed at that time as Zhang Ziyi [the family name is Zhang, and she is not related to the director], she starrred as Zhao Di, a sweet peasant girl who falls in love with the young teacher who comes to her village. It's an incredible performance that fortunately is available on DVD.

Her next role, as Jen Yu in Ang Lee's Crouching Tiger, Hidden Dragon [2000], brought her vast attention in the United States and around the world. In this and other films, she called upon her dance training [she joined the Beijing Dance Academy when she was 11] to help her in martial arts scenes, since she had not previously trained in any martial art. She followed this up with an appearance in Rush Hour 2 in 2001. At that time she did not speak English, and Jackie Chan reportedly served as translator between director Brett Tatner and her. Rush Hour 2 brought her to the attention of an even wider spectrum of the U.S. film audience.

To date, she has starred in two other films directed by Zhang Yimou, Hero [2002] and House of Flying Daggers [2004]. Her meteoric career has also seen her work with several other famous, even legendary directors, two of them from Hong Kong. Tsui Hark cast her in The Legend of Zu, his forgetable 2001 remake of his Zu: Warriors from the Magic Mountain [1983]. Wong Kar Wai's 2046, released in 2004, marked the first time that she was billed as Ziyi Zhang, apparently out of a desire to avoid confusion in the Western press as to which was her personal name and which her family name.

Ziyi Zhang can also be seen in Japanese filmaker Seijin Suzuki's Princess Raccoon and Rob Marshall's Memoirs of a Geisha, both 2005 releases.

So, Happy Birthday to you, Ziyi Zhang. We look forward to many happy returns of you to the silver screen. 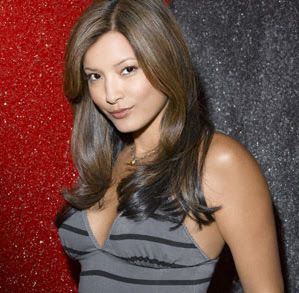 Beautiful and talented Asian-American film and television star Kelly Hu is once again viewable on a weekly television series, ABC's mid-season comedy In Case of Emergency. It's on Wednesday nights at 9:30 PM Eastern Time.

A former Miss Teen USA, Kelly got her start on the Growing Pains television show in the late '80s, and has since appeared in numerous shows and films. Her first noticeable film role was in Oliver Stone's The Doors, where she was billed as Kelly Ann Hu. I first became aware of her when she played Chen Pei Pei in the initially fantastic TV series Martial Law. Kelly's character was named after the famous Hong Kong actress Cheng Pei-pei who is best known to general Western audiences for her portrayal of the nefarious Jade Fox in Ang Lee's Crouching Tiger, Hidden Dragon.

In Martial Law, Kelly's character was the protoge of Hong Kong policeman Sammo Law, played by the great Sammo Hung. The show ran for two seasons from 1998 to 2000, but was ruined after the network suits brought in Arsenio Hall in an attempt to make a solid success into a break-out hit. Instead, they changed the dynamics from a fish-out-of-water to a buddy movie [think Rush Hour on TV]. Unfortunately they failed to realize that Hall, a has-been-who-never-was, certainly was no Chris Tucker. With this change, the show went straight into the toilet.

In Case of Emergency is a 30 minute sitcom about four graduates from the same high school who are now in their thirties and who find that their lives have turned out differntly, and far worse, than they'd planned, hoped and expected. Kelly was the class valedictorian, but instead of becoming a top-notch lawyer, she's working in a "massage parlor." There she speaks to customers in a hilarious pseudo-Korean accent. The three male leads are all what one might charitably refer to as losers
I began watching this show just to see Kelly again. My expectations were low, but I was quite pleasantly surprised. The show is far better than I had ever dreamed. In fact, it's pretty damn good, especially for being fresh out of the gate. And Kelly, it turns out, is a terrific comedienne.

I say check it out. This show deserves to succeed, if for no other reason than so we can get our weekly fresh fix of Kelly Hu. Yummy!!!!!

Update 02.25.07 - For the past couple of weeks In Case of Emergency has been supplanted by special 2 hour episodes of the returning Lost series. ICoE is scheduled to return on Wednesday, February 28th, 2007, still at 9:30 E.S.T. on ABC. Be there, for Kelly, for yourself, and for some good laughs.

P.S. - I've got to mention that one episode that already aired featured David Carradine (Kill Bill, the various incarnations of Kung Fu) in a hilarious role as "Guru Danny." Here's hopin' it'll be a recurring role.