This Friday, September 28, 2007, at 7:30 pm, Japan Society is providing New Yorkers with an opportunity to see this terrific, exciting actioner. It's the lead-off film in the NO BORDERS, NOLIMITS: 1960s Nikkatsu Action Cinema series. I was fortunate in being able to see it at a press screening last week, and I'm looking forward to seeing it again on Friday.

Jo Shishido, seen later the same year in the better known Branded To Kill by Seijun Suzuki, here plays an assassin hired by one Yakuza group to kill the oyabun (leader) of a rival group. After pulling off the hit, he and his partner (played by Jerry Fujio) find their initial escape plan thwarted at the airport. They then hide out in a cheap inn in Yokohama, hoping to escape by boat. They are befriended by a young woman who works there (actress Chirose Kobayashi) and who also longs to escape.

An unexpected - and highly unlikely - rapprochement between the two Yakuza gangs, leads to betrayal by those who ordered the hit. Now Jo and his partner find themselves targeted by everyone involved.

The ending, a face-off between Shishido's character and the gang members, some in a bullet-proof Mercedes, takes place on a barren expanse of reclaimed land. It's so over the top, so delectably implausible, that you just have to love it.

A Colt Is My Passport gets a 3 out of 4 star ACF rating, solidly recommeded.

NO BORDERS, NO LIMITS is the inaugural series of a new, annual event at Japan Society called "Monthly Classics." Mark Shilling, author (The Yakuza Movie Book: A Guide to Japanese Gangster Films) and critic, is the guest curator for this series. An earlier version of NB,NL was first presented at the 2005 Udine Far East Film Festival. Mr Shilling will be at Japan Society to introduce the film on Friday, and will be present afterward for a reception and signing of his accompanying book, No Borders, No Limits: Nikkatsu Action Cinema, newly edited and published by FAB Press.

Trivia:
- Shishido had plastic surgery, reportedly in 1956, that gave him his trademark "chipmunk cheeks." I'm pretty sure he also had eye surgery to give him more Occidental-looking eyelids.
- The initial target's car is a 1960 Dodge Dart, the top-of-the-line Phoenix model, I believe. My family had the mid-level Pioneer version, complete with push-button automatic transmission!)
Posted by Dr. Stan Glick at 12:15 PM No comments: 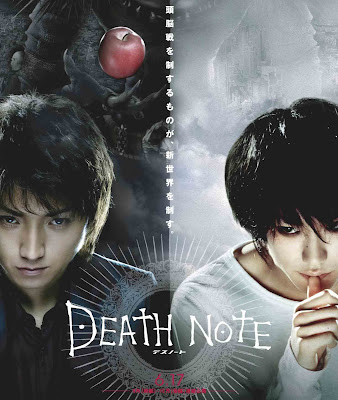 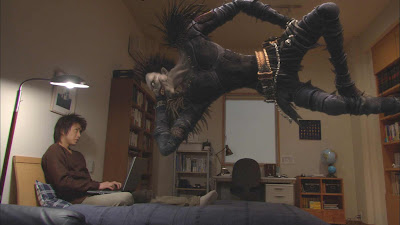 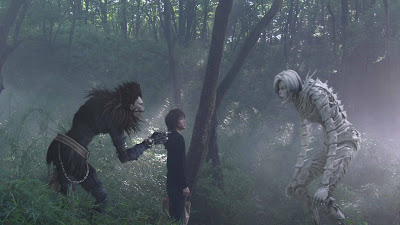 Sorry that it's been awhile since my last post, but the day job has just left me with next to no energy. However, when I received notice from VIZ Pictures, the live-action affiliate of VIZ Media LLC, that they'd acquired the North American theatrical and DVD distribution rights to both Death Note and its sequel, Death Note: The Last Name, I wanted to pass on the word right away.

These films are about what happens when Ryuk, the God of Death, drops his notebook and it's found by a young law student named Light, whose father just happens to be a cop. Light has become cynical about the normal legal system's aiblity to mete out justice. When he discovers that he can kill criminals by remote control, as it were, simply by writing their names in the notebook, he embarks on a mission to rid the world of crime.

Based on the manga written by Tsugumi Ohba and illustrated by Takeshi Obata, these films had their New York premieres this past July. They were jointly presented by Subway Cinema as part of the New York Asian Film Festival 2007 and by Japan Society as part of its Japan Cuts film series. Both films ranked in the top five picks as audience favorites.

I didn't get to see them in July, but ironically started watching my screener DVD of Death Note last night. I've gotten a bit more than half way through it and already can understand why it, and its sequel, were so popular.

Both films will be screening September 20-27 at the Fantastic Fest 2007 in Austin, Texas. For showtimes and tickets, go to http://www.fantasticfest.com/.

Death Note, but not its sequel, will be shown November 1-4 at the 11th annual Vancouver Asian Film Festival. For showtimes and tickets there, go to http:/www.vaff.org/.

Other screenings of the two films will continue throughout 2008, and VIZ Pictures is planning a summer 2008 release of both films on DVD. AsianCineFest will most certainly carry reviews of the DVD releases.

In the meanwhile, try to see them in a theater if possible, and check back here in the next few days for a review of the recent 2 disc DVD release of Ping Pong, also from VIZ Pictures. 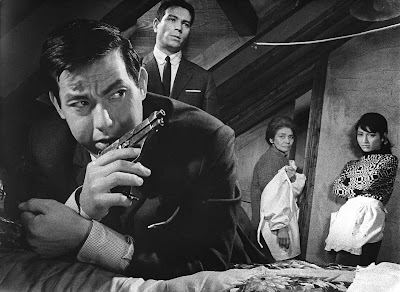 A Colt is My Passport © 1967 Nikkatsu Corporation

I've covered various film series at Japan Society for Asian Cult Cinema magazine for several years now, and I've seen lots of good films and quite a few great ones there. But I've never been as excited about an upcoming series as I am about NO BORDERS, NO LIMITS: 1960s Nikkatsu Action Cinema. This series marks the launch of a new annual event called "Monthly Classics" that will utilize guest curators to create film series that will feature -- have you guessed -- one screening approximately every month.

Nikkatsu produced over 500 action genre films starting in the mid-50s. Probably its best known products, at least in the U.S., are Seijun Suzuki's Tokyo Drifter (1966) and Branded To Kill (1967), the latter of which ironically led to Suzuki being terminated for making "incomprehensible" movies, as the studio suits put it. [Both of these Suzuki films, as well as several others, are available from The Criterion Collection. Enough said.]

NO BORDERS, NO LIMITS will feature eight films never before screened in the United States. The series will consist of:

Author and critic Mark Schilling, who began living in Tokyo in 1975 and who is currently the Japan correspondent for Variety, curated this show. He will introduce A Colt is My Passport, the series opener, on Friday, September 28th. Afterwards there will be a reception, and the author will be signing his book, appropriately titled No Borders, No Limits: Nikkatsu Action Cinema, which has been newly edited and published by FAB Press. Shilling's other works include The Yakuza Movie Book: A Guide to Japanese Gangster Films, which I'm currently reading and enjoying.

All films will be shown with new digital English subtitles, prints courtesy of Nikkatsu Corporation. Show times will be at 7:30 PM.

NO BORDERS, NO LIMITS is co-organized by Outcast Cinema. A tour of other US and Canadian venues is planned for later in 2007 and in 2008.

For further info click on this link to the NO BORDERS, NO LIMITS page at Japan Society.
Posted by Dr. Stan Glick at 6:49 PM No comments: