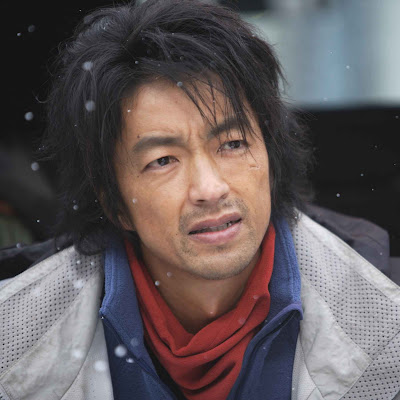 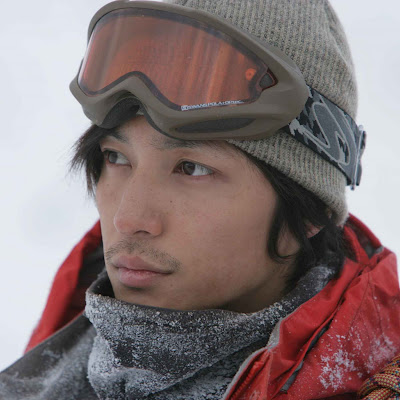 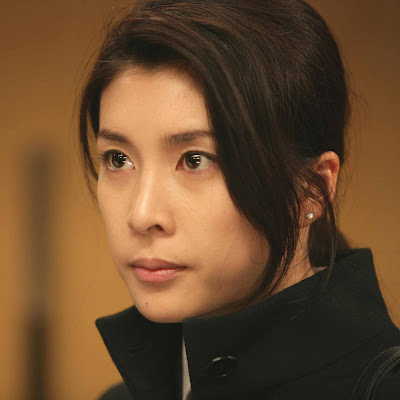 Takao Osawa portrays burnt out war photographer Yuki Nishizaki, who's seen one too many on-the-job horrors. An avid mountain climber for many years, he witnesses and photographs a U.S. stealth bomber, the titular Midnight Eagle, coming down in the Japanese Alps.

With reporter Shinichiro Ochiai (Hiroshi Tamaki, from Waterboys), he climbs through a blizzard to investigate. The two are fired upon by white-clad foreign agents who are also headed to the crash site, as are similarly garbed Japanese Special Defense forces. If the enemy gets there first and succeeds in setting off the Eagle's nuclear payload, the huge snowmelt and air-borne radiation will spell disaster for the country.

Meanwhile, magazine reporter Keiko Arisawa (Yuko Takeuchi, from Ring), Osawa's sister-in-law, has received photographs he took of the plane going down and becomes involved in her own investigation in Tokyo. This leads her to two of the foreign agents who were involved in sabotaging the plane at the U.S. airbase in Japan.

Most of the film cuts back and forth between these two locations: the snow-covered mountains in northern Japan and Tokyo, where we follow both Arisawa's investigation and the response of the Japanese government.

I've seen the film described as an "action thriller" and "a gripping adventure story" and I think these are fair descriptions of what it was intended to be. But director Izuru Narushima doesn't come particularly close to succeeding on this score. His cinematic interpretation, based on the eponymous novel by Tetsuo Takashima, doesn't have much in the way of really exciting action and isn't particularly thrilling. For me, it came across mainly as melodrama, and seemed more like a made-for-TV movie (though admittedly an expensive one with high production values) than a feature film release.

Now, I'm as ready as anyone to let some things slide: plot holes, inconsistencies, what have you. But here, there were just too many things that took me out of the picture. First off, the stealth bomber is said to have been flying missions over "the peninsula" and the enemies are described as "northern agents." Assuming the subtitles are accurate, it's like the film can't bring itself to say "North Korea." Meanwhile, there's no problem with bashing the United States, which kept the plane's nuclear payload a secret from the Japanese government.

Also, the "northern agents" on more than one occasion fail to kill Nishizaki and Ochiai. This despite the fact that the two are wearing clothing that makes them stand out from the snow. On the other hand, the same agents have no trouble ambushing and all but wiping out the white camouflage-wearing Self-Defense Force team. I know our two male leads have to make it to the plane - that's a given - but this is just too absurd, too inconsistent.

And how is it that the stealth bomber, which was brought down by a bomb that was place on it at the airbase where it was stationed) crashes in the mountains, breaks apart (we see one large piece standing vertical in the snow), and yet the fuselage remains almost completely intact, with all the lights and electronics working?! I don't think so, and I just wasn't buying it at all.

Midnight Eagle opened both in Japan and in the U.S. on November 23rd. Here, it's been playing at Manhattan's ImaginAsian Theater, and will be there through Thursday, November 29, 2007. For showtimes, click here.

On December 7th, it will be the first feature to be shown at the new ImaginAsian Center in Downtown Los Angeles. This will be the only center there dedicated to first-run Asian and Asian American films. It will also showcase live performances and special events. Located at 251 South Main Street, the facility will feature 250 stadium style seats, including a 16 seat VIP section. And while I wouldn't have chosen to open it with this film, I'm sure the center will prove to be a great treasure for fans of Asian films, just as the ImaginAsian Theater is here in New York. For further info and some photos, click here.

Midnight Eagle isn't a bad film, just not a particularly good one. (John Woo's Broken Arrow, while not a great film by any stretch, is still a far better actioner about a hi-jacked plane with a nuclear warhead.) For me, while Midnight Eagle didn't really succeed, it was still moderately enjoyable. At least I had fun in my bemused befuddlement at what I was at times watching.

ACF 056: Akira Kurosawa in the News 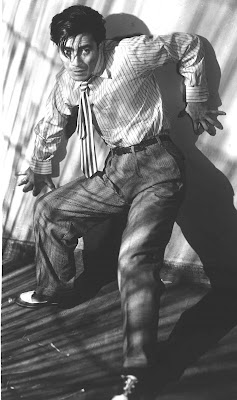 Toshiro Mifune as Matsunaga in
Akira Kurosawa's "Drunken Angel"
Japan, b&w, 1948
Three items related to Akira Kurosawa have recently come to my attention and should be of interest to any fan of Asian films.

First off, Kurosawa's Drunken Angel (Yoidore tenshi) is due to come out this month on Criterion DVD. This 1948 release was the first Kurosawa project in which Toshiro Mifune appeared; previously he'd been in three films by other directors.

Takashi Shimura stars as Dr. Sanada, the title character. Despite his problem with alcohol, Sanada is a consciencious physician who runs a clinic located near a large cesspool, which represents Japan in the early post-WWII years. But Mifune, as a gangster with TB, steals the movie. The scene in which, drunk and with pompadour flying, he jitterbugs like a madman, well, that alone is worth the price of admission.

Drunken Angel is a film of several other firsts besides being the first pairing of the director with Mifune. It was the first film that Kurosawa considered to be truly his own, having previously had to deal with Japanese wartime and then Allied Occupation censors. It was also the first time he worked with composer Fumio Hayasaka, who went on to score all but one of Kurosawa's films until he died in 1955. Finally, this was the first Kurosawa film to win the prestigious Kinema Jumpo Best Film award, which is roughly equivalent to the New York Film Critics' Award.

I first saw this film at Japan Society in 2003 and have hoped ever since that it would become available on DVD in the U.S. And now it soon will be joining the many other Kurosawa films from Criterion. (I believe that there are more Kurosawa films available from Criterion than from any other director, which is fine by me.) And coming from Criterion, you know it's going to be a magnificent transfer. Hopefully there'll also be enough DVD extras to make all of us thrilled.

I've only seen No Regrets, a solid film about a college professor's daughter who is caught up in the turmoil of the suppression of dissent in Japan during the 1930s and '40s. I Live in Fear is said to be most memorable for the then 35 year old Mifune's remarkable portrayal of a 70 year old who is terrified of the nuclear bomb and hatches a plan to move with his loved ones to Brazil, where he believes they will be safe.

The only real potential clunker is The Idiot. This movie was a box office disaster. It supposedly didn't work because Kurosawa made the mistake of too slavishly adhering to his source material. In his autobiography, Kurosawa said he was prepared to "eat cold rice" because the film bombed. He was spared, however, when Rashomon (1950) won the Golden Lion award at the Venice Film Festival. In any case, I can't imagine any Kurosawa fan passing up five films at a most reasonable price.

---------------------------------------
Finally, and this is perhaps the only potentially bad news, VarietyAsiaOnline recently carried an article about Toho's plans to remake Kurosawa's classic Hidden Fortress (Kakushi-toride no san-akunin, 1958). This tale of a gruff general who, accompanied by two peasants, escorts a princess through enemy territory served, at a minimum, as inspiration for George Lucas's original Star Wars.

Shinji Higuchi, a director skilled in SFX, is to direct. Hiroshi Abe, said to be branching out from romantic comedy to action roles, will be taking over the Mifune role. Masami Nagasawa is set to portray the princess. In this remake, the two peasants will be combined into one character, a mountain dweller. This role will be filled by Jun Matsumoto, of the boy band Arashi.

Such ventures generally have disaster written all over them, but we'll just have to wait and see.

For the complete VarietyAsianOnline article on Toho's announced plans, click here.
Posted by Dr. Stan Glick at 6:56 PM No comments: