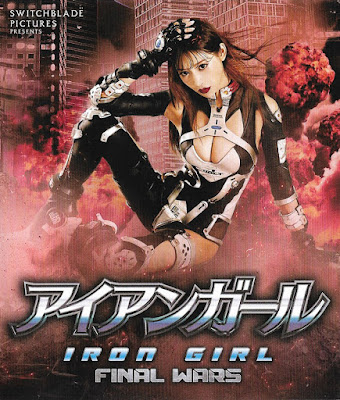 Iron Girl: Final Wars is the third, and apparently final, film in the post-apocalyptic action series that began with Iron Girl (2012) and its sequel Iron Girl: Ultimate Weapon (2015). All three films star Kirara Asuka as a lovely and well-endowed young woman named Chris who transforms into the titular role of sexy-suited kick-ass babe.

This time round, Chris is again involved with the resistance against the evil organizaton that seeks to totally dominate the post-apocalyptic world. One of the resistance leaders is Joe, whose former girlfriend Diana has left the resistance and become an enhanced altered soldier whose main target is Iron Girl. Further complicating matters is the fact that a mysterious young girl named Sara has been having dreams calling to Chris for help… even though the two of them have never met!

The action is decent enough, as was the case in the first two films in the trilogy. Sadly there isn't as much tittilating nudity as in the previous two films. Still, it's a worthwhile watch that brings Iron Girl's tale to a satisfying conclusion. Or maybe not, as the film's coda suggests that the series might carry on.

AsianCineFest Rating: 2.5 out of 4 stars

Iron Girl: Final Wars is published by Switchblade Pictures and distributed by Section23 Films.
Posted by Dr. Stan Glick at 10:47 AM No comments: