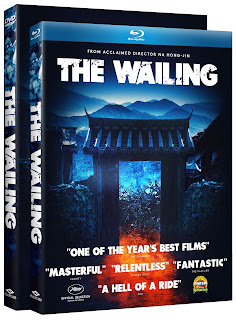 Suspicion leads to hysteria when rural villagers link a series of brutal murders to the arrival of a mysterious stranger in the supernatural thriller The Wailing, debuting on digital September 6, and on Blu-ray™ and DVD October 4 from Well Go USA Entertainment.

Over six years in the making, director Na Hong-jin’s meticulously crafted follow-up to the globally acclaimed films The Yellow Sea and The Chaser smashed box office records upon its debut in South Korea, where fans made many return viewings in order to catch new clues and debate what’s sure to be the most talked-about ending of 2016.

Synopsis:
In this unbelievably tense supernatural thriller, a foreigner’s mysterious appearance in a quiet, rural village causes suspicion among the locals - suspicion which quickly turns to hysteria as the townspeople begin killing each other in brutal outbursts for seemingly no reason. As the investigating officer watches his daughter fall under the same savage spell, he agrees to consult a shaman for answers - unknowingly escalating the situation into something far more dangerous.
Posted by Dr. Stan Glick at 12:30 AM No comments:

Sentai Filmworks has announced its acquisition of Little Busters EX. Adapted from the visual novel Little Butsters! Ecstacy, this eight-episode OVA series expands on one high school boy’s adventures into a world that isn’t always what it seems to be.

This reimagining of the Little Busters storyline pits protagonist Riki Naoe against familiar faces such as Saya Tokido, a treasure hunter in hiding from an elusive group known as the Dark Executives, and Kanata Futaki, young chairwoman of the so-called "Public Morals Committee" who seems to have a sinister agenda of her own.