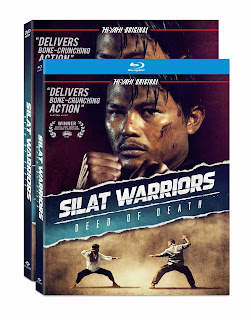 
Silat Warriors: Deed of Death (a.k.a. simply as The Deed of Death) is an action-packed martial arts film from Malaysia that arrives on digital, Blu-ray™ and DVD today, Tuesday, July 6th from Well Go USA Entertainment. This review is based on my watching the Blu-ray version.

Mat Arip (actor Fad Anuar) is a young man and an inveterate gambler who wages — and most often loses — money and other possessions on illegal betting, drag racing, or street fights. When he puts up the deed to his family’s home and, his widowed father, older brother Mohammad Arip Bin Nayan (single monikered actor Namron) and his sister Fatima (Feiyna Tajudin) must confront the gang that shows up to collect on his debt. Fortunately, both of his siblings are formidable martial artists.

(Silat, for those not familiar with the term, is the collective name for various martial arts practiced in Malaysia, Indonesia, and other areas of Southeast Asia. There are many different styles (aliran) and schools (perguruan), but they tend to focus either on strikes, joint manipulation, weaponry, or some combination thereof.)
Silat Warriors: Deed of Death marks the feature film debut of director Ariel Abu Bakar. He’s assembled much of the talent from Malaysian martial art schools and training facilities and put them to good use. The movie is chock full of extended action sequences. The last is a “one-against-many” fight that pits Nayan against the numerous members of the gang that have kidnapped Mat Arip. It is most certainly because of these sequences that Silat Warriors: Deed of Death won the Daniel A. Craft Award for Excellence in Action Cinema at the 2020 New York Asian Film Festival, the first Malaysian film to win the award.

Stick around through the beginning of the end credits for a brief coda that will bring you face-to-face with an important character for the first time and which clearly seems to indicate that a sequel is in the works.

AsianCineFest Rating - 2.5 out of 4 stars. Certainly a decent enough actioner, but not much to offer in the way of plot or character development. So my 2.5 overall rating is the average of 3 stars for the action and 2 for the story.
Posted by Dr. Stan Glick at 9:30 PM No comments: