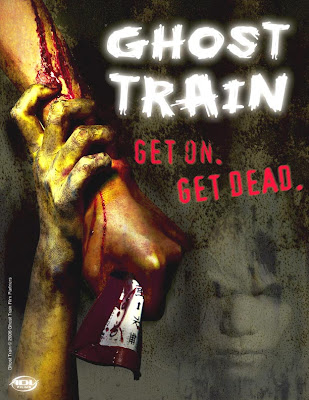 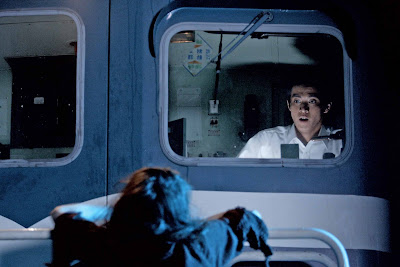 Not all passengers ride inside the Ghost Train! 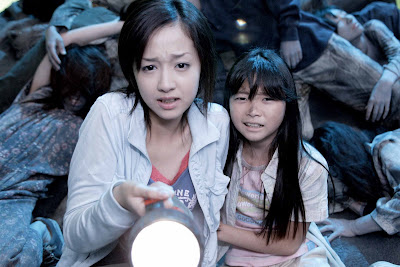 Weird things are happening in the Mizunashi Station and the nearby train tunnel. A lost rail pass keeps turning up. Passengers disappear. Bodies are seen on the tracks, then are gone. A strange phantom can be seen - or can she? - on the video monitors. And a spectral voice insists, "I want what's mine."


All of which doesn't bode well for soon-to-graduate high school student Nana (lovely Erika Sawajiri, who was seen as Hotarubi in 2005's Shinobi). And her plate is already pretty full. Her father is dead, or at least not around. Her mother is in the hospital. Several of her "hipper" female classmates are giving her attitude. Then her younger sister Koriko has to go and disappear from the train platform! What's a girl to do?

Well, for spunky Nana, it's some persistent detective work that reveals the disturbing history of part of the tunnel near the station, then into the deadly realm itself on a dangerous mission to rescue her sister. In all this she is assisted by her friend Kanae; by an ex-train conductor/engineer who was demoted to office work for seeing things on the track that his bosses insisted weren't really there; and by a mysterious one-eyed woman.

Now, horror movies are not my favorite genre, but I enjoy a good scare as well as anyone, I guess. I've seen and enjoyed a number of the recent J-Horror films, such as Ringu (Ring), Ju-On (The Grudge) and Kairo (Pulse), though thankfully not their Hollywood remakes.

Ghost Train, the second film directed by Takeshi Furusawa (who was assistant director on Kairo), is not in the same league as these, but not many films are. Still, I found it quite entertaining. Some genuine scares and good comic relief, including one hilarious line about that repeatedly lost rail pass I mentioned earlier.

I saw the film on May 7th at its East Coast Premiere sponsored by New York - Tokyo and ADV Films. The screening took place at the very fancy Tribeca Grand Hotel in Manhattan. After some really hairy stuff had been happening near the end of the film, I said out loud, "I am so taking a cab home tonight!"

This elicited a huge wave of laughter around me. Then I heard a guy off to the side ask, "What did he say?" Someone repeated my utterance pretty much verbatim, and a second wave of laughter erupted.

I say any film that can turn a small, fancy screening room in an ultra-swank Tribeca hotel into an old 42nd Street Grindhouse, if only for a few moments, is alright in my book.

There'll be several opportunities for you to decide for yourself. Ghost Train will be screening June 6-13, 2007 at the Two Boots Pioneer Theater on East 3rd Street in New York City. On the West Coast, I've been told there'll be a screening at the 4 Star Theatre in San Francisco on July 6th.

And in any case, the Ghost Train DVD is scheduled for release by ADV Films on July 17th.

Get yourself ready for some awesome Asian films 'cause the 6th New York Asian Film Festival is coming to town! The first fourteen days will be at the IFC Center (323 Sixth Avenue, between 3rd and 4th Streets). The last four days will be at Japan Society (333 East 47th Street, between 1st and 2nd Avenues) where several films will be co-presented as part of the society's JAPAN CUTS - Festival of New Japanese Films. That festival will continue through July 15th.
NYAFF's full line up is not yet confirmed, but among the sixteen definite titles so far are: After This Our Exile by Patrick Tam, mentor of Wong Kar-wai; I'm A Cyborg But That's Okay by Park Chan-Wook; and Johnnie To's 2006 mega-hit Exiled. I am really stoked!
For further info on the festival, including updates, visit Subway Cinema.
For further info about JAPAN CUTS - Festival of New Japanese Films, click here.
Posted by Dr. Stan Glick at 9:57 AM No comments:

As I mentioned a couple of posts ago, West 32nd premiered at the 2007 Tribeca Film Festival. The word I got is that the various screenings "consistently sold out" and that many would-be viewers had to be turned away. Not surprising for several reasons.

First off, Korean American Michael Kang is a New York City based director who attended NYU's Tisch School of the Arts. His first film, The Motel (2005), garnered favorable reviews, won several awards and demonstrated that he was someone to keep an eye on. West 32nd, his sophomore effort, is about Korean organized crime; as far as I know, it's the first film to address this topic. And New Yorkers can't get their fill of hometown gangsters, no matter what the ethnicity.

The film starts with a fluid crane shot over "Korea Town," the block of West 32nd street where Korean businesses of various sorts are concentrated. Then there's some traveling steady-cam work going thru the narrow corridors of a "room salon" establishment, where wealthy and powerful men can relax and make important decisions while having their drinks poured by beautiful, smiling Korean women.

When the manager of the establishment goes outside and gets in his car, it's cut off by another vehicle. Shots ring out and the manager is left dead in the front seat of his vehicle as the other car speeds away.

When the boy's sister Lila Lee (Battlestar Galactica's Grace Park) asks him why the firm he works for is willing to do this, he replies, "Because we can win." Of course there's more to it than that. See, his law firm stands to benefit from the good p.r. and he stands thereby to rapidly advance towards a partnership.

To prepare his case, the attorney goes to the Korea Town section of West 32nd, an area almost as alien to this "white bread" Korean yuppie as the far side of the moon. There he meets mid-level gangster Mike Juhn (Hong Kong born actor Jun Kim, here making his debut in a Western film). Though on different sides of the law, Juhn is every bit as ambitious in his world as the defense lawyer is in his. In fact, Juhn's just been promoted to the manager job vacated by the murder.

Juhn realizes that, given the nature of his "business" in the Korean underworld, having a connection with a lawyer who "owes him one" might come in handy in the future. So he introduces Kim to the ins and outs of the scene, but only so far and in such terms as suits his own needs.

When a witness to the shooting unexpectedly comes forth, the overriding desire of these two men from two different worlds to succeed erupts into violent conflict.


Overall this is a pretty damned good crime caper. For me, some comments on the net (see the links below) are valid, while others aren't so much so. Mike Goodridge writes that the film, at roughly 90 minutes, is "too short to build a mythical portrait of an organized crime syndicate," which is true but kind of meaningless. At a panel discussion at The Korea Society after the film had premiered, director Kang spoke of wanting to do a Departed but having a Mean Streets budget, so I don't think he can be faulted on this count.

Erik Davis claims that since we never meet the accused kid, it's "impossible to feel sympathy for him or his grieving family." Not true by me. His mother and sister Lila serve as surrogates and their grief and concern is clear, strong and unmistakable.

More on the mark is Brian Liner's comment that the film's "plot holes result in some 'huh' moments," a point the Davis also makes. There are some plot holes, narrative lapses, or what-have-you, and that's always unfortunate. But they're not so numerous or severe as to significantly undermine the film. Weaken it, yes, a bit; but ruin it, not at all.

The film is predominantly in English, but a great deal of the dialogue is in Korean with English subtitles. This serves to keep the language used by different characters at different times and in different situations genuine and believable. It also allows for the viewer to be let in on some information that is withheld from particular characters, namely the lawyer.

The soundtrack's got that gangsta rap thing going for it. Seems like this kinda sound has become de rigeur in any hard-edged urban film featuring Asians. I don't care all that much for it, but totally agree that it is appropriate as used here.

West 32nd explores the moral ambiguities of its two male leads as well as that of Lila, the accused's sister. And when ethics is irrelevant and the strength of the opposing wills is equal, victory goes to the player with the stronger hand. All of which makes for a fascinating tale. This film really deserves to be picked up for distribution in the U.S. and I strongly hope and believe that it will. When it does, give it a try. And keep an eye out for future projects from Mike Kang. I think he's a director who'll be giving us better 'n' better films for years to come.

Linda Linda Linda is due out on DVD today, so here are a few more screenshots: 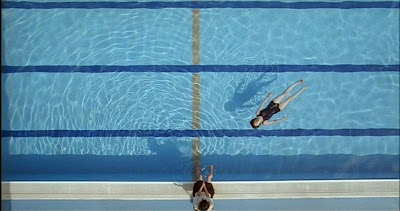 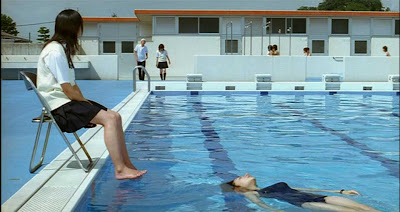 Kyoko approaches to find out if the band's going to perform 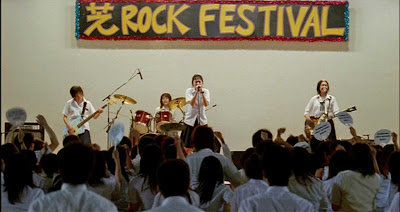 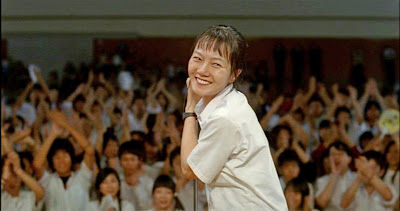 Son basks in the audience's applause
Posted by Dr. Stan Glick at 12:40 PM No comments: