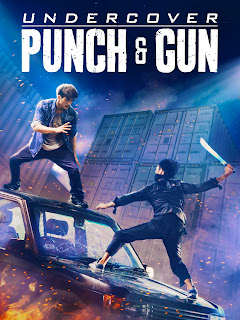 Undercover Punch & Gun / Wo hu qian long
Co-directed by Lui Koon Nam and Frankie Tam
Hong Kong, 2019, 91 minutes
An undercover cop’s daring plan to infiltrate a notorious drug ring is severely compromised when a rival agency attacks mid-trade and kills the gang’s leader in the action-packed MMA thriller Undercover Punch & Gun (a.k.a. Undercover vs. Undercover). Their cover blown, both teams are forced to unite and take to the high seas in an attempt to overthrow the ruthless smuggler behind it all. Undercover Punch & Gun wil be coming to Digital, Blu-ray™ and DVD on June 8 with an all-new English dub from Well Go USA Entertainment.

Synopsis:
While an elite cop is working undercover to infiltrate a notorious drug ring, his plan is compromised when a rival agency with a grudge attacks during a trade, killing the gang’s leader. Their cover blown, both teams are forced to unite and take to the high seas in an attempt to overthrow the ruthless smuggler behind it all.
Posted by Dr. Stan Glick at 9:30 PM No comments: 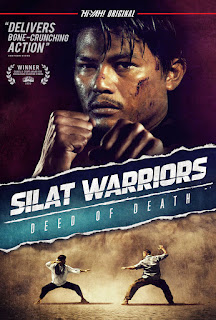 Silat Warriors: Deed of Death / Geran
Directed by Areel Abu Bakar
Malaysia, 2019, 101 minutes
When their younger brother brings a ruthless criminal gang to their door, a family must fight together against the threat in the action-packed martial arts epic Silat Warriors: Deed of Death (a.k.a. simply as The Deed of Death), which will debut exclusively on the martial arts streaming service Hi-YAH! on June 4th, before hitting Digital, Blu-ray™ and DVD July 6th from Well Go USA Entertainment.

Silat Warriors: Deed of Death won the Daniel A. Craft Award for Excellence in Action Cinema at the 2020 New York Asian Film Festival, the first Malaysian film to win the award.

Synopsis:
When a reckless young gambler’s wild lifestyle of illegal gambling, drag racing, and betting on brutal street fights pits him against a ruthless criminal betting ring, his luck finally runs out. The gang shows up at his family’s home to collect on the debt, forcing his family to fight in order to save their land and his life—before their limited time runs out.
Posted by Dr. Stan Glick at 9:30 PM No comments:

DELIVER US FROM EVIL reviewed 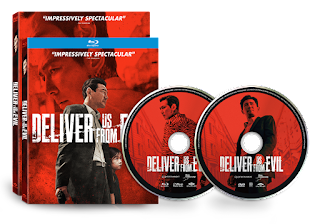 Deliver Us from Evil is a high octane action, crime thriller from South Korea. It debuts on digital & Blu-ray today, May 25th from Well Go USA Entertainment.
Synopsis:
After the shocking kidnapping of a little girl in Thailand, Kim In-nam (Hwang Jung-min), a mercenary with a murky past as a government black ops agent, is forced to re-emerge from the shadows when he learns the incident is closely connected to him. With the help of expat Yui (Park Jeong-min) he flies to Thailand and begins tracking the girl’s whereabouts, moving ever closer to the notorious child trafficking ring responsible for her abduction. However, when an infamous gangster nicknamed The Butcher (Lee Jung-jae) learns just who has entered the country and is finally within his grasp, he goes on a bloody rampage to thwart the ex-agent’s rescue mission as retaliation for a killing that he will never be able to forget—or forgive.
There's no shortage of exciting action sequences in this thriller. Fists, feet, knives, guns, etc. all come into play at one time or another.
Disc Specs:
-- Audio
-- Korean DTS-HDMA 5.1
-- Korean Stereo
-- Subtitles
-- Full English
-- English
-- Off
-- Bonus
-- Making Of
-- Filming Location
-- Teaser
-- International Trailer
-- U.S. Trailer
-- Previews
-- The Paper Tigers
-- The Swordsman
-- Train to Busan Presents: Peninsula
AsianCineFest Rating of Deliver Us from Evil: 3.5 out of 4 stars, very highly recommended; a highly entertaining actioner.
Posted by Dr. Stan Glick at 10:17 AM No comments: 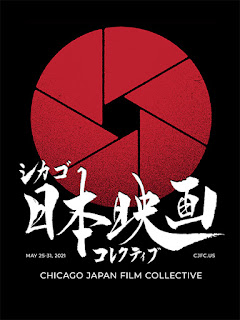 “We’re excited to bring the best of contemporary Japanese cinema to the Midwest,” said Sakamoto, adding that “Our festival is designed to bring the American Midwest into conversation with Japanese culture.”

Supported by CATCH US Performing Arts (CUPA) and the Japan Foundation New York, the festival will use the Eventive platform for ticketing and screenings and is intended to spark conversations about culture and to facilitate understanding between Japan and the Midwest region.

According to Kono Hiroshi, “With the ongoing pandemic, we hope the Chicago Japanese Film Collective can provide a space where people from diverse backgrounds come together to appreciate art and to focus on our shared humanity.”

Among the festival's highlights is Hayashi Kaizo’s BOLT, a drama about the immediate aftermath of the earthquake that rocked Japan and resulted in the Fukushima nuclear disaster starring Nagade Masatoshi. Also, All About Chiaki Mayumura (provisional), a genre-bending drama about a musical celebrity who is much more than meets the eye. Other films include VIDEOPHOBIA, a black and white cyber thriller; Yan, shot on location in Japan and in Taiwan; The House of Seasons, a family drama about a teenager who overcomes her mental health challenges; and The Manga Master, a film about the life of manga artist pioneer Kitazawa Rakuten. In documentaries, the festival will feature Alone Again in Fukushima, a deeply human story about a man who stayed in the evacuation zone in order to care for animals left behind following the Fukushima nuclear disaster, and Prison Circle, which provides an intimate look into one of Japan’s most notorious prisons.

The Chicago Japan Film Collective introduces the best in contemporary Japanese films—that would otherwise be inaccessible—to Midwestern audiences. Due to the coronavirus pandemic, the inaugural edition will be held virtually, however plans are in motion to hold future festivals in person. 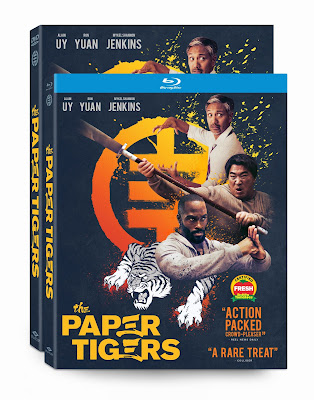 The Paper Tigers
Directed by Tran Quoc Bao
U.S./2020/11 minutes
Certified “Fresh” on Rotten Tomatoes and critically-acclaimed around the world, The Paper Tigers , an homage to feel-good martial arts films like The Karate Kid, debuts on Blu-ray™ and DVD June 22 from Well Go USA Entertainment. The audience-pleasing film shows how three dedicated kung fu disciples grew into washed-up, middle-aged men—now one kick away from pulling their hamstrings. But when their master is murdered, they must juggle their dead-end jobs, dad duties, and old grudges to avenge his death. The award-winning feature film debut of Director Tran Quoc Bao, The Paper Tigers stars Alain Uy (“Helstrom,” “True Detective”), Ron Yuan (Mulan, “Marco Polo”), and Mykel Shannon Jenkins (The Gods, Undisputed III: Redemption). The film is currently available to watch in theaters and on digital.


Synopsis:
As teenagers, kung fu disciples Danny (Alain Uy), Hing (Ron Yuan) and Jim (Mykel Shannon Jenkins) were inseparable. Fast forward 25 years, and each has grown into a washed-up middle-aged man seemingly one kick away from pulling a hamstring—and not at all preoccupied with thoughts of martial arts or childhood best friends. But when their old master is murdered, the trio reunites, soon learning that avenging their sifu will require conquering old grudges (and a dangerous hitman still armed with ample knee cartilage) if they are to honorably defend his legacy. 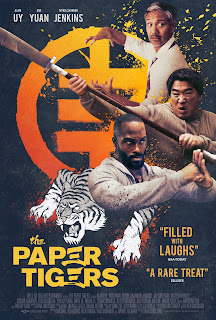 The Paper Tigers
Written and directed by Tran Quoc Bao
Starring Alain Uy (True Detective), Ron Yuan (Mulan),
and Mykel Shannon Jenkins (Undisputed III),
USA, 2020, 108 minutes
The Paper Tigers is a very fine martial arts action comedy that puts some interesting twists on the traditional "You killed my master!" revenge tale.
When they were teenagers, Danny, Hing and Jim were  the only disciples of their kung fu master. Twenty-five years later, now in their forties, they have grown apart and are no longer practitioners of the martial art they once loved so much. They pretty much have changed into washed-up middle-aged men dealing with such issues as weekend visitation with their teen-age kid, bad knees, annoying former classmates, and middle aged spread.
Upon learning that their elderly master has been murdered, Hing reestablishes contact with Danny and the two of them then seek out Jim. Determined to avenge their sifu, they have to muster all the skill and bravado they can in an effort to identify the assassin and exact retribution. 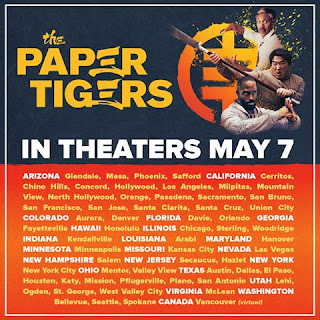 Find tickets by clicking here to go to the film's official Well Go USA Entertainment webpage, then scroll down a bit.