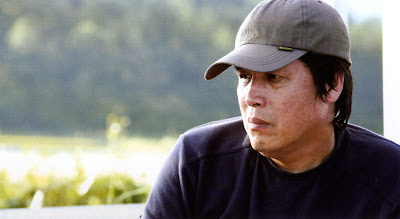 In conjunction with the retrospective of his four films at Asia Society in New York, which begins Monday, May 5th, I was given the opportunity to submit an email with some questions for director Lee Chang-dong. This method does not allow for follow-ups or for asking about things that come up in a response, as a normal face-to-face interview does, but I think it worked pretty well nonetheless.

At the end of this post, after my questions and his responses, I've provided a link to the Asia Society webpage about the series.

ACF: I understand that you had achieved success as a writer, then, when you were not yet 40 years old, did your first work on film as one of the screenwriters of Director Park Kang-soo's To the Starry Island.

How did your involvement with that film come about?

Lee: Actually at that time, I was in considerable doubt both as a writer and as a person stepping into his late 30s. Perhaps you could say I wanted to punish myself. And so I wanted to do something like hard physical labor, and what I chose was to work as an Assistant Director. Director Park Kwang-soo had just suggested that I do the scenario[script] for 'To the Starry Island,' and I made a kind of 'deal' with him to use me as an Assistant Director. Of course at the time, my filmmaking experience was nonexistent and I was in no way qualified to AD. In a way what made me a director today is very much indebted to Park Kwang-soo's gamble to use me as First Assistant Director.

ACF: After writing another screenplay (for A Single Spark, 1995), you wrote and directed your fist film, Green Fish (1996).

How did you come to direct? Was it something you had been considering for some time? Did you want to make a personal statement rather than have another director produce his own interpretation?

Lee: How I came to be a director results from a few unexpected coincidences. Because I wanted to 'punish myself' I worked very hard on the set, and it seems that made a good impression on some of the staff and cast members that I didn't expect. After that, those people kept suggesting that I become a director, and eventually helped me to debut as one. Of course, it's not as though I had never had the desire to become a director. I had always been curious about the distance between film and reality, and had questions about the apathy of movies (whether commercial movies so-called art films) that were growing farther and farther detached from reality. I wanted to make films that closed the distance a little, between film and reality.

ACF: Both Green Fish and Peppermint Candy, which followed, allude to the economic and political situation in South Korea. While they, like all your films are primarily about individuals and their stories, did you deliberately set out in Green Fish and Peppermint Candy to portray the economic and political problems that South Koreans faced in the 80s an d 90s?

Lee: There's no question that 'Green Fish' and 'Peppermint Candy' draw on the political and economic problems of Korea. But they weren't my main focus. My main interest has always been human beings. I believe film is the best medium to show something about human beings. But people can't be separated from the environment (including the political and economical reality) that surrounds them. Man is affected by his reality, and in fighting against it finds meaning in his life. Those are the kinds of things I wanted to show.

ACF: I loved the train footage used between segments of Peppermint Candy. As I recall, they were filmed from the back of the train as it traveled forward, but the film was run backwards in the movie so it looks like we're going forward, but we're actually going back time, in terms of the train's "real movement." How did this idea for using this device come about?

Lee: 'Peppermint Candy' is a film about a sort of time travel. And so I needed a way to visualize time. That's the train. Actually, time and trains have several similarities. You could say that mankind's perception of time changed with the invention of the train. Film is, of course, a medium that deals with time, and in that sense, the fact that one of the first films ever made is the Lumiere Brothers’ 'Arrival of a Train' is very symbolic. Trains are also linked with memory. That's probably why the image of a ‘train journeying to the past’ came to mind.

ACF: In both Green Fish and Oasis, there are characters with Cerebral Palsy, though the male in Green Fish is of far lesser plot significance than Moon So-ri's Han Gong-ju in Oasis. In Green Fish the character is cared for and loved by his family, whereas in Oasis, Gong-ju is exploited or ignored. Does this have to do with your belief in a difference in approach to family in more traditional, rural-rooted families (Green Fish) vs urbanized, Westernized families (Oasis)?

Lee: It's possible. Another reason could be that there is a mother in 'Green Fish,' and in 'Oasis' there are no parents. I think it's very difficult, a strain for brothers and sisters to care for a sibling with cerebral palsy, even more so than for parents to care for such a person. But I don't think the two individuals with cerebral palsy in the films are in such different circumstances from each other.

ACF: You have been described as "an actor's director," much as Sidney Lumet has. While your films all tell compelling stories, and tell them marvelously, you have clearly elicited incredible performances from your actors and actresses, who have been nominated for and won numerous awards. [I personally thought that both Moon So-ri, for Oasis, and Jeon Do-yeon, for Secret Sunshine, should have at least received Oscar nominations, but such are the vagaries of Hollywood.]

Are you comfortable with being considered "an actor's director"? Are their certain things about your approach to filmmaking that you think especially contribute to such outstanding performances?

Lee: Though I'm not exactly sure what 'an actor's director' means, it's clear to me that of the many things shown on the screen, the human being is the most important thing. There are probably a million things a director can do to draw out an actor’s performance. These words also mean that there is no particular method to it at all. I often tell my actors "Don't act." I tell them instead to instead "experience" the character's emotions. I only help them to the extent that they can feel and experience those emotions.

ACF: Are there any things that you accomplished as Minister of Culture and Tourism about which you are particularly proud?

Lee: Though I did my best as a Minister, I’d prefer not to talk about it right now. Others will be able to judge the things I did.

ACF: The publicity materials for Secret Sunshine indicate that you were planning Peppermint Candy even before Green Fish had been released, and that Secret Sunshine had been, as you put it, "in my head ever since 2002." after Oasis came out.

Is something already in the works for your next project? If so, can you say something about what it will be about?

Lee: There is something I'm thinking about. But I don't think it’s the right time to reveal it yet. Before I start any film, I ask myself 'Why do we need this film right now?' I'm looking for the answer to that question these days.

Most sincere thanks to Director Lee for taking his time to consider and respond to my queries, to Ernest Woo for his terrific job translating the questions and answers, and to Helen Koh of Asia Society and Jenny Lawhorn of fatdot.net for arranging this interview.

For more information about the Lee Chang-dong film retrospective or to order tickets, click here.