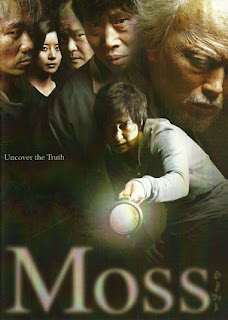 RYU Hae-guk (actor PARK Hae-il, Memories of Murder) is a recently divorced young man who travels to an isolated village where his elderly father has died. RYU senior was the spiritual leader of the village, and though father and son were estranged for some time, Hae-guk take his filial duties seriously. When certain shortcuts are taken with regard to the cause of death, he becomes suspicious. This feeling grows when it becomes clear that the village chief, CHUN Yong-duk (a fantastic JUNG Jae-young, Silmido), and his three cronies would prefer that he leave immediately.

RYU previously had exposed improper behavior by public prosecutor PARK Min-wuk (YOO Joon-sang, seen in HONG Sang-soos The Day He Arrives and Like You Know It All). PARK was consequently demoted and, understandably bearing a grudge, warned RYU to "Stay low and live like the moss...quietly."

But Hae-guk is not one to live quietly and let well enough alone. His insistence on "getting to the truth" about his father's death sets in motion a chain of events that threaten his father's reputation, the village chief and his cronies, as well as Hae-guk himself.

Can Hae-duk force the truth to be revealed, and if he can, will he be able to handle it?


In 2010 the cast and crew of Moss won several various awards at the Blue Dragon Film Awards, the Daejong Film Awards, the Icheon Chunsa Film Festival, and the Korean Film Awards ceremonies. Such accolades are well-deserved testimony to the film's attributes.

One would expect a Two-Disc Special Edition have an ample number of extras. Well, those expectations are more than met with the almost 90 minutes of video extras. The first four listed below are particularly worthwhile:

I first learned of Moss when it was shown as a special Halloween screening of Korean Cultural Service's Korean Movie Night series back in October, 2011. (The AsianCineFest announcement post about that screening is here.) As one of the co-hosts of the VCinema Podcast, I participated in our review of it in Episode 37 in November. (The Moss portion of the episode begins at time-code 44:42.) Coffin Jon and Josh didn't care for it, at least not much, and I gave it a moderate recommendation for a rental, but said definitely don't buy it. So much for a first viewing.

When I heard of this 2-disc release, I thought it would be interesting to give the film another shot, and I'm so glad I did. My opinion of it changed dramatically. I now recognize it as a really fine movie, a taut thriller that's well structured, extremely well acted, and full of suspense. And the bonus disc is like delicious icing on an already tasty cake.

I think this special edition DVD release of Moss is worthy of a place in your collection. It doesn't merely hold up to but gets even with repeated viewings. ACF Ratings: 3.5 out of 4 stars for the film (very highly recommended) and 4 out of 4 for the special features (outstanding).
Posted by Dr. Stan Glick at 9:30 AM