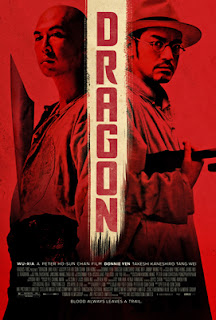 Dragon (a.k.a. Wu Xia) , a terrific combo martial arts and detective mystery movie, was shown at the 2012 New York Asian Film Festival this past July. The film will begin its U.S. theatrical run this coming Friday, November 30th, 2012, in eight confirmed markets (listed at the end of this review). As many as seven additional markets may be added.


Donnie Yen (Hero; Seven Swords; Kill Zone; both Ip Man films, etc.) stars as Liu Jinxi, a papermaker and seemingly run-of-the-mill fellow. He’s married to lovely Ayu (Tang Wei, Late Autumn; Crossing Hennessey; and Lust,Caution). They have two boys: the older is Ayu’s from her previous husband, who abandoned her and the child, the younger one is her’s and Jinxi’s. They live in a small, remote village in Yunnan in southwest China.


Their life of peaceful anonymity and marital bliss goes all to hell one day in 1917 when two thugs come into a village store and demand money. When the shopkeeper tries to resist, the pair go ballistic on him and everyone else in the store. Initially cowering behind a cabinet, Jinxi emerges and wraps his arms around the larger would-be-robber. Holding on for dear life, he is flung around the store and ultimately winds up in a river. But it’s the two robbers who somehow end up dead. When it turns out that one of them was a top wanted criminal, Jinxi becomes somewhat of a celebrity and is commended for his role in bringing the pair to justice, though he claims that he was just lucky.


Inspector Xu Baijiu (Takeshi Kaneshiro, Chungking Express, House of Flying Daggers, the two-part Red Cliff movie) is unconvinced. With his glasses and straw hit, he displays Sherlock Holmes-like investigative abilities, including that of recreating exactly what happened by carefully examining the evidence and the testimony of those involved. Having made the mistake of going easy on a young criminal in the past, a mistake that cost innocent people their lives, Baijiu is fanatical about enforcing the letter of the law. He doggedly pursues Jinxi, not believing his account of what transpired with the two crooks and convinced that he is hiding something from his background. As a result Ayu comes to question everything she thought she knew about her husband, and the lives of Jinxi, his family, Baijiu and all the villagers are threatened by a group known as the 72 Demons, led by Jimmy Wang Yu, star of the legendary Shaw Brothers film The One-Armed Swordsman (1967).


Like the films of Quentin Tarantino, Dragon alludes to many other movies. The revealing of the surprising past of a seemingly ordinary family man is reminiscent of David Cronenberg’s A History of Violence. Baijiu, as I’ve already indicated, comes across much like an early 20th Century Chinese Sherlock Holmes. There are visual flourishes of the body’s inner workings similar to goings on in Andrzej Bartkowiak’s Romeo Must Die. And besides the presence of Jimmy Wang Yu, who is absolutely fantastic here, there is, suffice it to say, another nod to The One-Armed Swordsman.

This is in no way to cast any pallor on Chan’s film. I loved the references, nods or similarities I noticed. But it won’t diminish your enjoyment of Dragon one bit if you have no familiarity with any of the other movies alluded to.

Director Chan (The Warlords, Bodyguards & Assassins) has crafted a fabulous tale that features terrific martial arts. (Yen, besides starring, was also the action director). Dragon also offers compelling family drama and intriguing criminal investigative techniques. Underlying it all is the question — and it’s a big one that’s given serious and due weight here — of whether or not one can really achieve redemption and truly atone for past mistakes, sins and crimes.

These are the markets that have been confirmed so far

Check local listings for showtimes.
Posted by Dr. Stan Glick at 1:30 AM