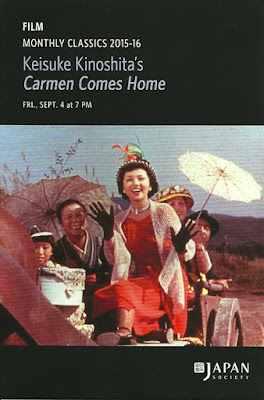 Just a quick final reminder that Carmen Comes Home (Karumen Kokyo ni Kaeru, 1951) will be shown tonight at Japan Society, 333 East 47th Street, NYC. It's a delightful and charming film that should be seen not just for it's historical significance as Japan's first color film, but because it's wonderfully entertaining comedy with a standout performance by Hideko Takamine as the "exotic" dancer Lily Carmen.

Complete information can be found and tickets purchased here.

This screening of Carmen Comes Home is the first film in Japan Society's film series of Monthly Classics, year-round screenings of beloved classics, hidden gems and recent discoveries of Japanese cinema on the first Friday of every month. It is also being shown in recognition of Shochiku's 120th anniversary
Posted by Dr. Stan Glick at 12:30 AM