BROTHERS coming to Digital and DVD on September 4th, 2018 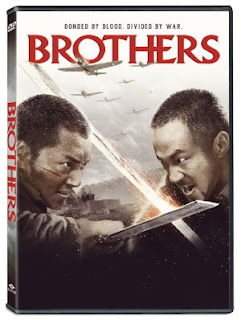 Here's what Well Go has to say about this upcoming release:

The close relationship between two brothers is ripped apart during the 1936 Chinese civil war when they end up on opposite sides of the conflict in the action drama Brothers, debuting on digital and DVD September 4 from Well Go USA Entertainment. Directed by Kiefer Liu (Don Quixote), the film fetures a striking visual look with black and white images interspersed with random flashes of color and pared-down CGI backgrounds. Brothers stars Ethan Li (The Blue Cornflower), Peter Ho (The Monkey King) and Xia Zitong (The Monkey King).

Synopsis:
Once a poor vagrant, Chen Tiejin has risen through the ranks of the Red Army and is now a brave and experienced company commander. During a dangerous rescue mission, Commander Tiejin and his Red Army troop are locked in heated battle with the Kuomintang soldiers. Raising his weapon to deliver the final blow, he stops dead – the solider is none other than his brother he lost five years before, now working alongside the enemy. In a time of hardship and war, can brotherly love bridge the divide to find peace?

I've watched my review screener and will be posting my review on, or just before, the September 4th release date.
Posted by Dr. Stan Glick at 1:45 PM