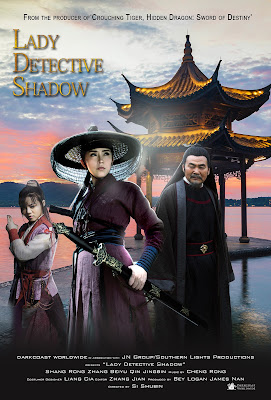 Previously released in China in May of 2018, Lady Detective Shadow was recently released by TriCoast Worldwide onto various U.S. digital streaming platforms. These include: Hoopla, Vimeo on Demand, Amazon, Vudu, iTunes, Google Play + Fandango, with other platforms to stream later.

Written by Hu Rong, Lady Detective Shadow sees its protagonist embark on a dangerous journey through the badlands of Ancient China, which is governed by the imperial houses and bandits alike. After several inexplicable brutal murders plague a remote desert area, the fierce and famous Lady Detective Shadow, Sima Feiyan, (Shang Rong) must use all her wit, wisdom and kung fu skills to find the murderers and instill justice. But as she delves deeper into the mystery, she soon discovers there is much more at stake than just another renegade killer.

With its Holmes-esque heroine, Lady Detective Shadow introduces an intuitive, sly and cunning woman, who never sacrifices her femininity or sense of self. Stitched together with high-quality mystery, suspense and an intriguing storyline set against the historical and cultural backgrounds of ancient China, Sima Feiyan never misses a clue, proving herself a match for literature’s other great detectives.

Watch the trailer here.
Posted by Dr. Stan Glick at 12:30 AM