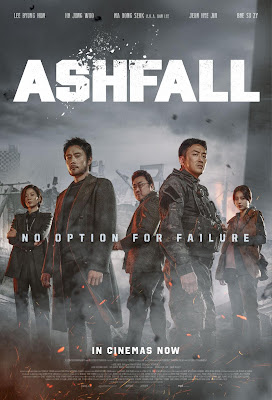 Ashfall, a disaster action-drama from South Korea, opened nationwide on January 17th. I watched an online screener on my iMac at home.

Captain CHO In-chang (HA Jung Woo) is about to end his dangerous field career in the Explosive Ordinance Disposal Unit of the South Korean Army, which is a good thing as his wife Ji-young (BAE Su Zy) is do to have their first child soon.

Unfortunately Baekdu Mountain, along the border between North and South Korea, undergoes a 7.8 volcanic eruption, with more to follow. This at a time when a US. warship is en route to pickup North Korea's last six nuclear warheads, ending the demilitarization of the North.

Professor KANG Bong-rae (MA Dong Seok, a.k.a. Don Lee), a Korean-American seismologist, has identified three more lava layers, the first two small, but the third is really big and will lead to massive devastation. Fortunately he thinks he has a plan that will minimize the eruptions. Unfortunately it involves CHO leading a time into North Korea, stealing the six nuclear missiles and detonating them at a precise place in the labyrinth on mines near the volcano.


To locate the warheads, In-chang's team needs the assistant of a North Korean military officer, RI Jun-pyong (LEE Byung Hun) He's a master of betrayal, making him an unreliable ally with an agenda of his own. Oh, and he has to be recovered from a North Korean military prison! Later in the film, as In-chang and Jun-pyong drive towards the mountain with the nukes, I couldn't help but thinking of Frodo and Sam going to Mount Doom in The Lord of the Rings. The difference here being that Jun-oyong is not the ever-reliable friend that Sam was.

The premise of the movie admittedly is pretty far out there, but then again so was that of John Woo's Face/Off, one of my all-time favorite action movies, and within a few years of its release, doctors began performing facial transplants, albeit not as complex as those depicted in Woo's film. So Ashfall viewers have to really suspend their disbelief and go along with this fine flick on its own terms. It's well worth the ride.

The list of theaters at which Ashfall was scheduled to open on January 17th can be found in my release announcement post that day by clicking here. Check local listings to see if it's still playing in your area.