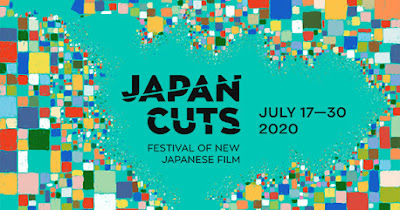 Japan Society NY has announced that, in light of the ongoing situation regarding COVID-19, they are taking North America's largest contemporary Japanese cinema festival out of its usual form and crafting a completely online version of JAPAN CUTS.

Re-imagining this format, they will maintain the festival’s high quality of film offerings and its intimate support of the film community while also finding new ways of engaging with now-nationwide audiences.

Set within both recurring sections and new initiatives, the online festival will offer a diverse slate of around 30 feature films and shorts programs. Live-streamed virtual Q&As, panels and greetings from guest filmmakers will serve as opportunities for in-depth interaction.

The full lineup of films and events will be revealed in late June, and AsianCineFest will be providing updates and additional information.
Posted by Dr. Stan Glick at 11:33 AM