Museum of the Moving Image and Subway Cinema
In association with
Taipei Cultural Center in New York, Ministry of Culture, Republic of China (Taiwan)
Present 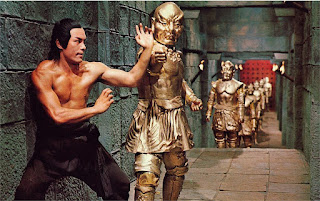 
The Old School Kung Fu Fest is back, and this time Museum of the Moving Image and Subway Cinema will co-present eight newly restored films and one fan favorite classic by Kuo on glorious 35mm — four titles available exclusively online, December 6–13, and another five films for in-person big-screen viewing at MoMI, December 10–12.

Whether you know his name or not, when someone says “Old School Kung Fu” the first image that flashes across your brain is probably from a Joseph Kuo movie. Taiwan’s ultimate independent filmmaker, Kuo put his stamp on the Seventies as his own boss, writing, producing, and directing dozens of movies through his production company, Hong Hwa International Films, which he founded in 1973.

Kuo’s credo was simple: “I cannot let down the person who buys my works.” He learned to deliver maximum impact on minimum budgets, taking the latest trends of the day and turning them into hard-hitting spectacles boasting unlimited mayhem. To make his movies rock the hardest on the smallest of budgets he assembled a rotating cast of charismatic action stars that included Wen Chiang-lung (who looks like Bruce Lee after a Cantopop makeover), the musclebound Carter Huang, the puckish Li Yi-Min, the underrated female fighter, Jeanie Chang, the versatile Jack Long and Mark Long. Working with action choreographers like Corey Yuen, one of the Seven Little Fortunes, and Yuen Cheung-yan, brother of Yuen Wo-ping, his flicks feature wall-to-wall fight scenes, and in an attempt to please every single audience member these fight scenes go on, and on, and on, continually changing location and upping the stakes, so that just when you think you’ve seen every possible variation on two guys standing in a field kicking the stuffing out of each other, Kuo takes it to another level.

Full of funky editing tricks that momentarily turn his movies into experimental flicks, Kuo hooks eyeballs with convoluted storytelling structures packed with frenetic flashbacks that force viewers to pay close attention. Everyone is related to everyone else, everyone has a secret identity, there’s almost always a last minute revelation popping up out of nowhere, usually with evil laughter on its lips, and every movie single revolves around revenge. While the first half hour of any Joseph Kuo film takes some patience while he clears his throat and gets down to business, once things kick off it’s a non-stop roller coaster ride that ends in an apocalyptic beatdown that leaves the main characters doling out a galaxy-shattering finishing movie before confronting the futility of vengeance. Delivering martial arts mayhem and a moving moral message in 90 minutes or less, Joseph Kuo gets in, delivers the goods, makes his point, then gets out, leaving you hungry for more. And in this year’s Old School Kung Fu Fest we’re offering plenty more.