Subway Cinema's next SUNDAYS ON FIRE screening this Sunday, May 8th 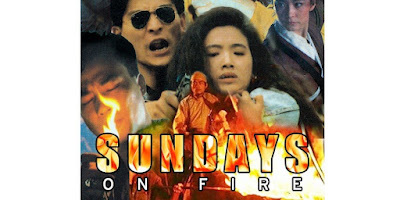 Sundays On Fire
When: Sunday, May 8, 2022 at 12:00 pm
Where: Nitehawk Cinema
188 Prospect Park West, Brooklyn, NY
Tickets
The second Sunday of every month sees Subway Cinema take over the Nitehawk Cinema in Brooklyn to unleash an action classic from the golden days of Hong Kong movies. The titles are not revealed until they appear onscreen because it’s more fun that way but, believe that you'll be celebrating the biggest stars of the ‘80s and ‘90s in their best movies, all presented in glorious 35mm.

This Sunday’s movie redefines “celebrate.” Every Chinese New Year, Hong Kong’s biggest and most badass turn in their greatest movies and this is one of the most insane Chinese New Year movies ever made, a tornado of absolutely all the action stars, comedians, and stunt wizards in Hong Kong cinema rampaging through a movie from one of HK’s greatest action directors. It’s a bit of a western, a bit of an action movie, a bit of a comedy, but most of all it’s a delirious spectacle where the stunts and the fight scenes keep getting bigger…and bigger…and bigger until there isn’t a building left standing onscreen. If you ever wanted to be astonished, this is the movie that’ll astonish you until you explode.
Posted by Dr. Stan Glick at 10:30 AM