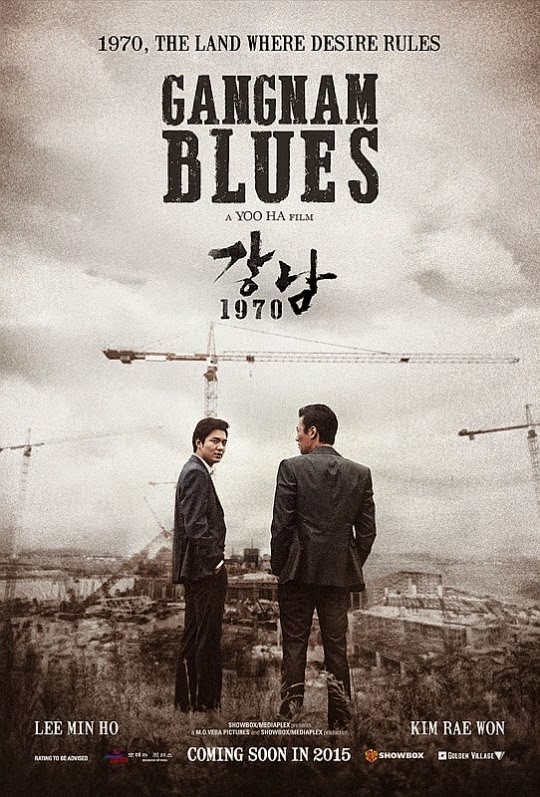 
Gangnam is an area of three districts, or local wards, in southeast and south Seoul that is known for its expensive real estate. It came to international attention with the 2012 release of the song "Gangnam Style" by South Korean singer Psy, which became not only a mega-hit  but also a viral video. But Gangnam was not always a wealthy, trendy area, nor was it originally a part of Seoul proper.

Gangnam Blues, as several title cards indicate at the beginning of the film, takes place in the 1970s when it was little more than a shantytown and farmland area. Two gangs, the Yeongdeungpo (YDP) and the Myeongdong (MD) sought control of the real estate which politicians had earmarked for Seoul's necessary expansion.

Jong-dae (Min-ho Lee) and Yong-gi (Rae-won Kim) are two young men who met when they were in an orphanage and who eke out a living as rag-men picking up and selling discarded clothing and such things on the streets. They come to get work for a gang that is going to trash the convention of the Peace Party. During the melee, they get separated and Jong-dae, unable to locate Yong-gi, comes to the conclusion that he is dead. Such is not the case, but rather the two come to be aligned with rival gangs.

As each group seeks to obtain the upper hand in the acquisition of valuable real estate, violent confrontations, shifting alliances, and dastardly betrayals occur on both sides. Jong-dae and Yong-gi meet one-another in these circumstances, and whether or not the brotherhood that they had previously forged will prove stronger than the claims of their rival gangs is a major plot point.

Gangnam Blues is a smart and welcome addition to an already impressive roster of South Korean gangster films. (For an excellent article on the evolution of Korea's gangster cinema, see Samuel Jamier's "Boody Ties" in the May/June 2015 issue of Film Comment. It's part of a 30 page midsection on South Korean movies in that issue.)

The two leads are very good in their roles, as are the numerous older actors who play various politicians and gang bosses and under-bosses. There are several very good action set pieces, including a massive one that takes place in the rain at a funeral.