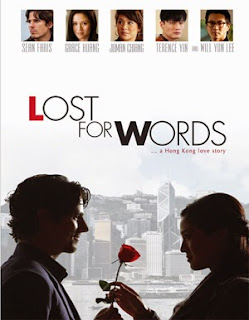 The multi-lingual, cross-cultural, romantic drama Lost for Words – which was well received on the international film festival circuit and in limited theatrical release in the U.S. – will be available on DVD and VOD June 23 from Green Apple Entertainment.

Against the sweeping cityscape of cosmopolitan Hong Kong, a damaged ex-Marine falls for a beautiful and talented Chinese ballerina after a chance encounter. As political, cultural and religious pressures mount, how far are they willing to go to remain together? Starring: Sean Faris (Never Back Down), Grace Huang (The Man With the Iron Fists), Will Yun Lee (The Wolverine, CBS’ Hawaii Five-0, Total Recall), Terence Yin (Lara Croft Tomb Raider: The Cradle of Life, Robin-B-Hood) and noted Hong Kong actress Joman Chiang (Fog, The Drunkard).
Posted by Dr. Stan Glick at 12:30 AM