Reminder: Ozu's "I Was Born, But ..." is at Japan Society this evening 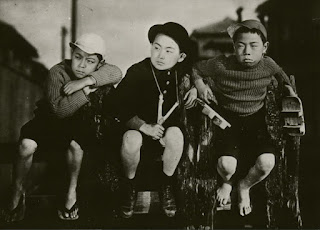 In this early silent comedy by Yasujiro Ozu, two precocious young boys get used to their new suburban neighborhood – avoiding classes, battling bullies, making friends – while their father commutes to work every day. When they witness him being subservient and playing a fool for his boss, the boys become ashamed and decide to protest with a hunger strike, declaring, “You tell us to become somebody, but you’re nobody!” This charming and insightful consideration of childhood innocence and social hierarchies is widely acknowledged as the master director’s first great film, later reworked into his 1959 color film Good Morning. Screening one day after Children's Day (May 5th) in Japan.
Posted by Dr. Stan Glick at 2:00 AM