THE POKÉMON COOKBOOK to be published by VIZ on December 6, 2016 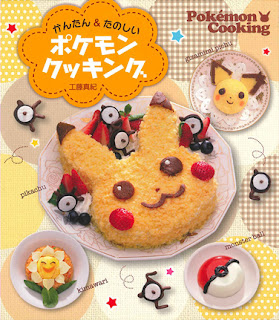 Create a variety of delicious dishes that look like your favorite Pokémon characters—from desserts to pizza—with more than 35 fun, easy recipes. Make a Poké Ball sushi roll, Pikachu-style ramen or mashed “Meowth” potatoes for your next party, weekend activity or powered-up lunch box.

“This book offers fans a tasty way to celebrate POKÉMON with dozens of recipes inspired by the property’s many iconic characters,” says Beth Kawasaki, Senior Editorial Director for VIZ Media. “Filled with mouth-watering snacks, entrees and desserts, THE POKÉMON COOKBOOK is sure to become a fun and creative kitchen companion for families and foodies!”

For more information on titles available from VIZ Media, visit www.VIZ.com.
Posted by Dr. Stan Glick at 12:30 AM