Encore screening of "Teiichi: Battle of Supreme High" to be held on June 15th, 2018 at Japan Society NY 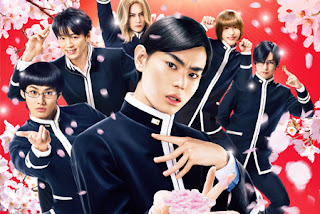 Teiichi Akaba has a singular dream: crush the competition, become prime minister and rule his own country. But first he just has to get through high school. An absurdist satire of Japan's elitist pathways to the seats of power, Akira Nagai's adaptation of Usamaru Furuya's manga finds Showa-era teens battling for the student council presidency through sabotage, bribery, fisticuffs and the manipulation of more than a few unspoken crushes.

Winner of the JAPAN CUTS 2017 Audience Award, this comedic crowdpleaser returns to Japan Society for an encore screening in anticipation of the upcoming 12th edition of JAPAN CUTS (July 19–29).
Posted by Dr. Stan Glick at 12:30 AM