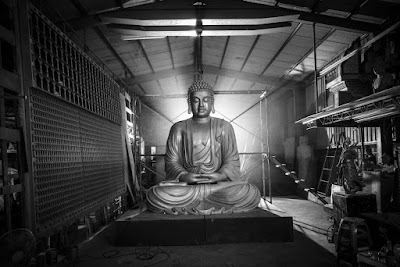 THE GREAT BUDDHA +, a wonderful drama from Taiwan, will be playing in Seattle on Sunday, July 1, 2018 at SIFF Cinema Uptown, 511 Queen Anne Ave N.

Synopsis:
Provincial friends Pickle and Belly Button idle away their nights in the security booth of a Buddha statue factory, where Pickle works as a guard. One evening, when the TV is on the fritz, they put on video from the boss’s dashcam—only to discover illicit trysts and a mysterious act of violence. Expanded from a short, Huang Hsin-yao’s fiction feature debut The Great Buddha + (the plus sign cheekily nodding to the smartphone model) is a stylish, rip-roaring satire on class and corruption in contemporary Taiwanese society. (New Directors New Films)

I saw the film this past April in conjunction with its New York Premiere at the New Directors New Films series jointly presented by the Museum of Modern Art (MoMA) and the Film Society of Lincoln Center.