MOJIN: THE LOST LEGEND coming to home video on May 3rd 2016 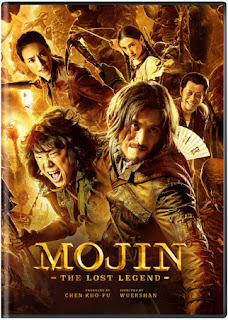 Based on the #1 Bestselling series of novels and starring Shu Qi (The Assassin), Chen Kun (Young Detective Dee: Rise of the Sea Dragon), Angelababy (Tai Chi Hero), and Huang Bo (Legend of the Fist: The Return of Chen Zhen), Mojin: The Lost Legend debuts on Blu-ray™, DVD and Digital HD on Tuesday, May 3rd from Well Go USA Entertainment.

Directed by Wuershan (Painted Skin: The Resurrection), the action/adventure fantasy thriller follows three retired tomb raiders lured back to their original vocation by a mysterious, businesswoman/cult leader who wants them to find the ancient tomb of a Mongolian princess. They eventually learn that what she really wants is to possess a famed artifact known as the Equinox Flower that allegedly has the power to raise the dead.

Synopsis:
Some people have a special gift. They’re able to travel between the realms of the Living and the Dead ... and Tomb Raiding can mean Big Business. Welcome to the world of the Mojin. Mojin: The Lost Legend pits a trio of legendary grave robbers against scholars, rivals, and the law – until an offer from a mysterious stranger tempts them into one last heist…an adventure that will test their skills, their friendship, and ultimately – their mortal souls.

Bonus Features Include:
-- Making of Featurette
-- Behind the Scenes - interviews with:
-- Chen Kun
-- Huang Bo

AsianCineFest already has received its Blu-ray screener, so look for our review on or just before the May 3rd release date.
Posted by Dr. Stan Glick at 12:30 AM