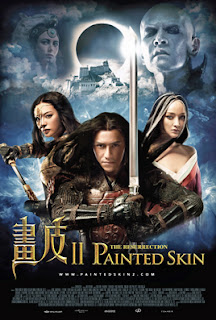 
Painted Skin: The Resurrection is single-monikered director Wuershan's sequel to the 2008 original which was directed by Gordan Chan. It opened this past Friday, August 17th in four cities: New York City, Los Angeles, San Francisco, and Toronto. (Sorry, but no info about whether or not the film will be released in more North American cities.) Actress Xun Zhou (Beijing Bicycle, Legend of the Black Scorpion, The Flying Swords of Dragon Gate) reprises her role as Xiaowei, a fox demon.

Actress Wei Zhao (Shaolin Soccer, both Red Cliff films) and actor Kun Chen (The Flying Swords of Dragon Gate) also return, albeit in new roles. Zhao portrays Princess Jing, one of the emperor's fourteen daughters. Chen is General Huo Xin, who is assigned to the White City near the boarder with the warmongering Tian Lang State. (Note: I have not seen the original film and have deduced that these two are playing different characters based on information in their filmographies.)


As the film begins, Xiaowei has been imprisoned and tortured in an icy abyss for 500 years because she had saved a mortal man's life in violation of the laws of the demon world. Quer (Mini Yang), a bird demon who was attracted to her face, pecks at the ice and sets her free. (The name is spelled this way in the DVD screener I watched, but spelled Que'er in some articles.) Since she is a demon, Xiaowei must devour human hearts so that she can maintain her human appearance. Only if a human willingly offers his -- or her -- heart to Xiaowei can she hope to transmogrify completely from a demon to a human.

After Jing saves Xiaowei from some marauders, the two become very close. Years earlier part of the right side of Jing's face had been badly mauled by a huge bear, and she now wear a partial face mask to cover her scars. Huo Xin, who had been the princess's guard and with whom she is in love, saved her life. Now she has come to White City to see if, despite her disfigurement and the difference in their statuses, he will return her love.


Complicating matters are the Emperor's plan to use Jing to pacify a potential threatening situation with the state of Tian Lag. Meanwhile, an oddball relationship develops between the adorable Quer and an itinerant demon slayer (Shaofeng Feng), a relationship that provides some amusing comic relief.


Overall the look of the film is quite lovely, with high production values. There's a lot of CGI going on here, which one would expect from a fantasy tale, and most of it is very good. However, a couple of scenes that use either green screen or rear projection are somewhat second rate: the foreground figures seem totally disassociated from the background.


I found many aspects of the film reminding me of other films:
- Pincess Jing's partial facemask brought Phantom of the Opera to mind
- Xiaowei  at times bore a resemblance to Brigitte Lin's character in the Bride with White Hair
- a swarm of arrows could have come from Hero (although here they were all aflame)
- the army of Tian Lang could have been a cousin to the evil forces from The Lord of the Rings trilogy
- when Xiaowei strips off her human skin, the result is like  full-body Face/Off
- scenes of Xiaowei and Jing together in a bath are reminiscent of Joey Wang and Maggie Cheung in Tsui Hark's Green Snake

But don't get me wrong; these associations did not in any way diminish my enjoyment of the film.

Painted Skin: The Resurrection is, on balance, a well-crafted, thoroughly enjoyable fantasy tale.