THE MAN STANDING NEXT reviewed; expands to nationwide release today 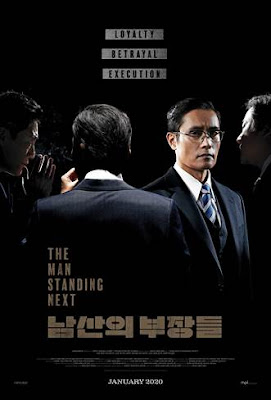 The South Korean political thriller The Man Standing Next opened at CGV Buena Park on January 24th and CGV Los Angeles on January 31st. Today, Friday, February 7th, the film goes into nationwide release, including such venues as the AMC Empire 25 on West 42nd Street. My review is based on watching an onine screener.

The film tells the story of scandals in the KCIA, the Korean Central Intelligence Agency, and is based on the non-fiction hit book KCIA Chiefs, although "creative liberties were taken for certain settings." Specifically, the film concerns the forty days leading up to the assassination of President PARK Chung-hee on October 26, 1979.

Back on May 16, 1961, the army began a military coup d'etat. The Third Republic was established and Korea's first intelligence agency was founded. The KCIA, based in Namsan, Seoul, used its absolute power to insure PARK's autocratic rule for eighteen years. The so-called "Directors of NAMSAN" were PARK's right-hand men.

KIM Gyu-pyeong (LEE Byung-hun) plays the current KCIA director thoughout the film's "present time" in the fall of 1979. PARK Yong-gak (KWAK Do-won). a friend of KIM as well as a predecessor in the post, has fled the country and is testifying against President PARK (LEE Sung-min) in the U.S. Congress. In his efforts, he's assisted by Deborah SHIM, a lobbyist. The other major character is GWAK Sang-cheon (LEE Hee-joon), chief of presidential security and a total toady to the president.

Tension escalates over PARK Yong-gak's revealing many of the leadership's sordid secrets. Political maneuvering by those wanting to maintain what power they have and by those aspiring to increased power, as well as by those who have at least somewhat decent intentions, leads to rising levels of conflict.

The film is a tense and dense thriller. Director WOO does an admirable job of keeping the developments clear and understandable. The cast is uniformly fine.

For the official movie teaser visit: https://youtu.be/rODF85LAUcg
Posted by Dr. Stan Glick at 12:30 AM