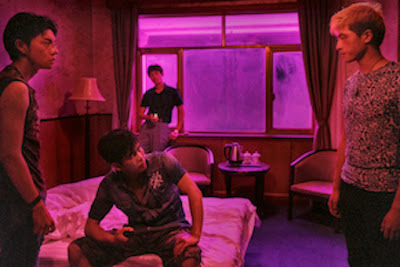 The Wild Goose Lake is Chinese director Diao Yinan’s much anticipated follow-up to his breakthrough film Black Coal, Thin Ice (2014). His new film is a noir crime thriller about a gangster on the run; it will open on March 6th, 2020 at New York’s Film Forum followed by a national roll out.

Set in the nooks and crannies of densely populated Wuhan in central China, the elegantly down-and-dirty The Wild Goose Lake follows the desperate attempts of small-time mob boss Zhou Zenong (the charismatic Hu Ge) to stay alive after he mistakenly kills a cop and a dead-or-alive reward is put on his head. Director Diao Yinan proves his action bona fides in a series of stylized set pieces and violent shocks, simultaneously devising a romance between Zhou and a mysterious young woman (Gwei Lun-mei) who’s out to either help or betray him. Diao deftly keeps multiple characters and chronologies spinning, while examining social changes of contemporary China. Chaotic and nocturnal, The Wild Goose Lake is punctuated by long pursuits and stunningly choreographed gang fights, in a filmic geometry of arresting beauty and originality.

DIAO Yinan was born in Xi'an, China, and studied dramatic literature at the Central Academy of Drama in Beijing. He has directed the features Uniform, Night Train, and Black Coal, Thin Ice. The Wild Goose Lake is a box office sensation in China, having grossed $23 million in its first week of release.