WARRIORS OF THE NATION reviewed; available today on Digital and Blu-ray 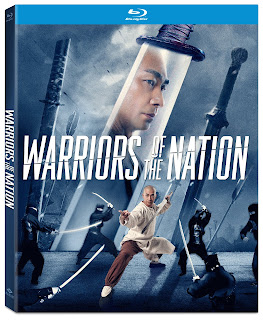 Warriors of the Nation, a period kung-fu action film, debuts on Digital and Blu-ray™ today, February 18th, from Well Go USA Entertainment. The film is a squeal to Lin Zhenzhao's The Unity of Heroes (2018), which also starred Zhao Wenzhuo as the Chinese martial artist, physician and folk hero Wong Fei-Hung. My review is based on watching the Blu-ray.

The film is set just after the end of the first Sino-Japanese War (1894-1895). The Japanese army hires a secret organization, The White Lotus Society, to kidnap Zhang Zhidong, a top Chinese military minister. Wong Fei-Hung (sometimes spelled Huang Fei-hung) and his disciples must rescue Zhang and prevent another war from starting.

With Warriors of the Nation and its predecessor The Unity of Heroes, Zhao Wenzhuo has joined an illustrious list of martial artists/actors who have portrayed Wong. These have included: the Hong Kong actor Kwan Tak-hing who starred as Wong in over 70 films between the 1940s and 1980s and earned himself the nickname "Master Huang"; Jet Li in the Once Upon a Time in China film series; and Jackie Chan in Drunken Master and Drunken Master II. Zhao not only does a fine job handling the martial arts sequences, but also imbues his character with dignity and depth.

One of the aspects of the film that greatly appealed to me was the significant extent to which Huang is assisted by his disciples, friends and other Chinese patriots in fighting both The White Lotus Society and the Japanese military agents. Thus Zhao, capable as he is, doesn't have to handle all the "heavy lifting" in the action sequences, but has considerable help from others. This results in a greater variety of martial arts on display than there would be with only the main protagonist confronting the bad guys, and gals.

Warriors of the Nation is a solid, kung fu, action flick and a worthy addition to the pantheon of Wong Fei-Hung films.

Asian CineFest Rating: 3.5 out of 4 stars; highly recommended
Posted by Dr. Stan Glick at 12:30 AM