This time it's the sixth annual New York Korean Film Festival, which will run from August 25th thru September 3rd at several venues in Manhattan and Brooklyn. The festival will offer fourteen feature films from 2005 and 2006, seven shorts, three panel discussions and a retrospective of four films by influential director Lee Man-hee. The feature films, many of which will be receiving their U.S. premieres at the festival, come from a wide gamut of genres: horror, comedy, melodrama, action, mystery and period pieces.

Wounding and Healing is the festival's theme this year, a consideration of "how films explore the intricate and powerful way in which human beings break each other down, only to build each other back up again."

The festival's web site is www.koreanfilmfestival.org and has full information about what's happening when and where, as well as descriptions of the films, directors, panelists, etc.

NYKFF 2006 is organized by The Korea Society, where two of the three panel discussions will be held (the first one will be at Korean Cultural Service), and is presented by Samsung.

In a related matter, I gotta throw out a special "head's up." The fall 2006 issue of Asian Cult Cinema magazine (#52) will be a special pictorial issue devoted to Who's Who In Korean Cinema. It should be out around the latter part of October, 2006. Something special to look forward to, I'd say, even if my column and those of my "elder brother" columnists Max Allan Collins and Ric Meyers have to be held off to make room for all the great stuff that I'm sure will be included.
Posted by Dr. Stan Glick at 4:02 PM No comments: 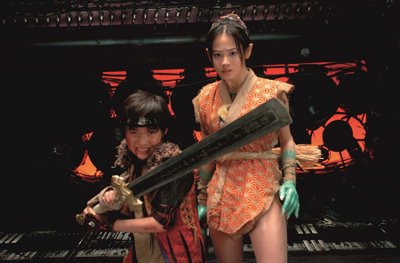 The Great Yokai War, from which the above still comes, was one of the many films that screened at the recent Asian Film Festival of Dallas. I contacted Chiho Mori, Executive Director of the festival, and asked for some wrap-up thoughts for AsianCineFest readers. Her response:

This years festival was very eventful. We had many filmmaker guests attend their screenings, Lane Nishikawa and Eric Hayashi for "Only the Brave," Ham Tran for "Journey From the Fall," and Ringo Le for "Saigon Love Story." We have not had many guest appearances in the past, so these screenings with filmmakers in atendance were a real treat for our audience. We would like to continue bringing these extra things to the festival. I think we had very strong programming this year, with wide variety. I hope the festival patrons enjoyed the festival and come back for next year. I have already started to look for films for 2007!!
************
Sounds like it was a very fine time for all. I wish I'd been there if only for Il Mare, the film upon which The Lake House was based. Best wishes for continued success for AFFD in 2007 and the years to follow.

One of my fondest hopes for AsianCineFest is that it will foster a sense of community among fans of Asian films, not only in the U.S. but around the world. I've already gotten hits from Mexico, Europe and Australasia. Whether it's Asian cult cinema or more standard fare, I'll let you readers know about it in as thorough and timely manner as I can manage.

I'll continue to pass on information about screenings at "legitimate" venues, such as the Film Society of Lincoln Center. But I especially want to share the word about those festivals and similar gatherings put together by Asian film fans and aficianodos, such as Subway Cinema and AFFD.

So when your group has an event scheduled, send info and images, if available, to: 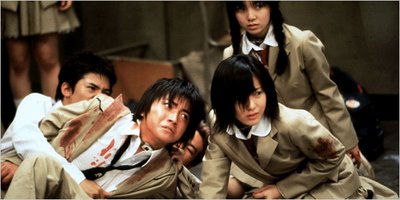 Kinji Fukasaku was a great Japanese director. The last film he completed was Battle Royale, which was released by Toei in 2000. Fukasuku directed over sixty films including the Battles Without Humanity series (a.k.a. The Yakuza Papers), Black Rose Mansion, and Blackmail Is My Business. He died on January 12, 2003 while making Battle Royale II, which was completed by his son Kenta Fukasaku. Now New Line Cinema is in the process of purchasing remake rights for the original film. Lovers of that film, which was never released in the U.S., are pretty much unanimous in their distaste, if not outright hatred, of the idea.
For those not familiar with it, Battle Royale is based on a popular novel by Koushun Takami. Set in the near future at a time when student violence in the schools has become rampant, the story is about a class of ninth grade Japanese students that has been selected at random by the powers that be. They are taken to an isolated island, each issued a weapon and given three days to kill one another until only one is left alive. They are even denied the existential "No!" because explosive necklaces have been place around their necks. Refusing to participate will result in the necklace exploding. This will also be the case if there is more than one survivor.

If acquired, New Line is looking to have the U.S. version produced by Neal Moritz, who served in that capacity on the Fast and the Furious series and other films and tv shows, and by Roy Lee, who produced U.S. versions of several Japanese hits, including The Ring 1 and 2, The Grudge 1 and 2, and The Lake House. These choices are hardly reassuring. Lee claims to be a fan of Fukasaku's original, which is fine. But The New York Times quotes him as also saying, "I would never want to make a movie that I thought was bad." It's meaningless drivel like this that bugs the hell out of me and makes me very leary. I mean, who wants to make a bad film, let alone cop to it? He also claims that he, and everyone else involved, wants "to try" to put across the movie's "pacifist angle."

I saw the original on an imported VCD a few years ago, and it's "message" did not primarily strike me as being pacifist or anti-violence. What struck me was that the film was not a simple minded blood and guts exploitationer. While there's plenty o' hackin' and bashin', slicin' and dicin' to go around, the film was truly great because it was also a brilliant criticism of the extremely highly competitive nature of the entire Japanese educational system. Since there really isn't any comparable competitiveness in the U.S. (except maybe New York City pre-school programs for the well-to-do) I have a really hard time seein' how it's gonna work, let alone play in the U.S.A.

As the Times quoted Grady Hendrix, a founder of Subway Cinema (see ACF 002), those of us who love the original "are disappointed that a remake is going to hit screens and not the original." If that remains the case and you haven't seen the original, then get to your Chinatown video store or a good website and pick it up either on VCD or DVD. Do it fast, though, 'cause once those U.S. rights are purchased, it may be very hard to come by Fukasaku's fabulous swan song. Oh, and you might also consider writing to New Line Cinema, it's sister studio Warner Brothers, and their corporate parent Time Warner, and strongly urge them to back a theatrical release of the 2000 version.