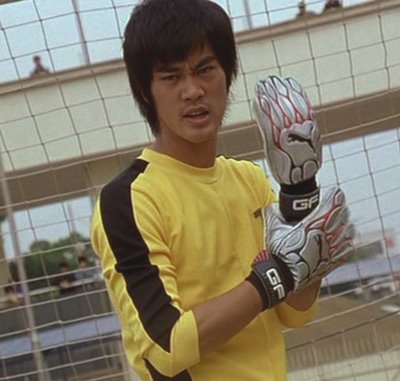 Earlier this month, Hong Kong newspapers reported that actor Chan Kwok-Kwan had been selected to portray Bruce Lee in a mainland Chinese television series that will recount the story of Lee's life in 40 episodes. .

As the goalkeeper in Stephen Chow's 2001 kung fu comedy Shaolin Soccer, Chan sported a Bruce Lee haircut and a yellow jump suit like the one Lee wore in Game of Death. The screen shot above shows Chan's strong physical resemblance to the late martial artist and movie star.

Chan previously has played Lee in commercials. He is said to have worked out, studied Lee's Jeet Kune Do martial art, and submitted tapes of himself impersonating Lee to his widow and daughter. They were consulted in the casting for the TV series and approved of his being selected.

Maybe we Westerners will eventually be able to get a subtitled, condensed version of the series on DVD.

Thanks to AsianCineFest reader Edgar Serrano for tipping me off about this interesting story.

The Associated Press article about this announcement was carried by washingtonpost.com and can be accessed by clicking on this link.
Posted by Dr. Stan Glick at 2:35 PM 2 comments: