This erotic and darkly comic melodrama by Japanese New Wave auteur Yasuzo Masumura stars a stunning Ayako Wakao as Mitsuko, a beguiling woman at the center of a tangled bisexual love quadrangle between bored housewife Sonoko (Kyoko Kishida), her husband and Mitsuko’s equally deceptive former fiancé. Adapted from the novel by Junichiro Tanizaki, the film’s story of destructive obsession, jealousy and manipulation is brilliantly rendered visually by Masumura and cinematographer Setsuo Kobayashi (Fires on the Plain), whose highly stylized compositions effectively portray the increasingly fractured psyches of four people constantly trying to out-maneuver each other for love at the risk of death. 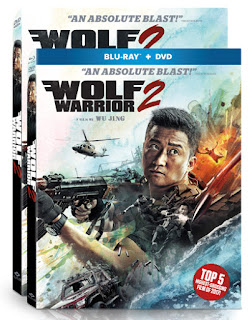 With Wolf Warrior 2, the iconic character is back, bigger and badder than ever, in this action-packed sequel to the 2015 blockbuster hit that debuts on digital, Blu-ray™/DVD Combo Pack and DVD December 12 from Well Go USA Entertainment. Directed by and starring Wu Jing (Wolf Warrior, Shaolin, Badges of Fury) as a loose cannon Chinese soldier who takes on a special mission in an African country protecting medical aid workers from local rebels and vicious arms dealers.

Synopsis:
The Wolf Warrior is back, bigger and badder than ever, in this action-packed sequel to the 2015 blockbuster hit. With his career in tatters, China’s deadliest Special Forces operative has settled into a quiet life on the sea. But when he crosses paths with a sadistic band of mercenaries terrorizing innocent civilians, he must reaffirm his duty as a soldier and save the day once again. Fists (and bullets, tanks, missiles and much more) will fly in this adrenaline-fueled tour de force of bravura action filmmaking, all culminating into a climactic battle between the Wolf Warrior and the mercenary leader (Frank Grillo).

In the summer of 1968, Ogawa Productions, led by visionary filmmaker Shinsuke Ogawa, entrenched themselves in the middle of the site of violent conflict wherein ongoing resistance to the construction of the Narita International Airport was demonstrated by local farmers, activists and students. Committing their lives to documenting the farmers’ struggle, the collective produced their most famous series of seven films known as the “Sanrizuka Series.” Amidst increasing police violence and tragedy, this meditative sixth film in the series focuses on life in Heta village itself, documenting its customs and people through eleven quiet scenes that convey deep empathy for the villagers and their experiences.

DEVOTION: A FILM ABOUT OGAWA PRODUCTIONS at Japan Society this Saturday, November 11th


Lesbian feminist artist and filmmaker Barbara Hammer (whose life work is currently being celebrated throughout New York City) screens her documentary about the influential and controversial Japanese filmmaking collective Ogawa Productions that most famously made films about the lives of farmers who stood in direct opposition to the construction of Narita International Airport on their land. Shot shortly after the death of the influential founding filmmaker Shinsuke Ogawa, this probing documentary utilizes archival material and firsthand interviews with Ogawa’s closest collaborators to parse out the complex, fascinating inner workings of one of Japanese cinema’s most uncompromising film movements.

"My film came alive when I interviewed the previously unheard voices of the few women that were in the collective and who had been relegated to the kitchen during their life in the commune." - Barbara Hammer, Hammer! Making Movies out of Sex and Life (The Feminist Press, The City University of New York, 2010).

This screening is co-organized with Carmel Curtis and Staci Bu Shea, curators of Barbara Hammer: Evidentiary Bodies at the Leslie Lohman Museum for Gay & Lesbian Art on exhibition from October 7, 2017 – January 28, 2018.

At 7:00 PM in Saturday, there will be a separate showing at Japan Society of SANRIZUKA - HETA VILLAGE, a documentary from Ogawa Productions.
Posted by Dr. Stan Glick at 12:30 AM No comments: