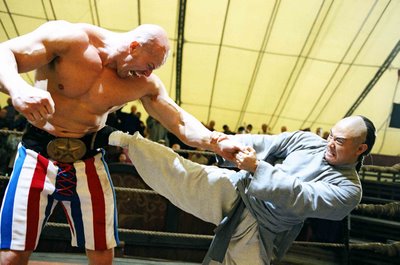 Foto: Rogue Pictures, a division of Focus Features
Make note of September 22, 2006 'cause that's when Jet Li's new film Fearless, which opened in Asia the beginning of this year, is set to start screening here in these United States. In it the Asian action film star returns to his martial arts roots, portraying Huo Yuanjia, a legendary fighter from around the beginning of the 20th Century.

The picture above shows Li facing off against Nathan Jones as Hercules O'Brien, one of several fighters that Huo comes up against. Jones reportedly is so big that he had to fit together three of the small beds in Chines hotels in order to lie down. (Jones can currently be seen in The Protector, the 2005 Tony Jaa film recently released in the U.S.)

With a running time just over 100 minutes, something between 20 and 40 minutes have been removed from Fearless's earlier form. Gone is a fight scene featuring Somrak Khamsing as a Thai fighter. A sub-plot in which Michelle Yeoh tells Chinese official's about Huo's story in an attempt to get wushu included in the 2008 Olympics has also been removed. I'm not happy about the fight scene being cut; sounds like it would be great viewing. As for the scenes featuring Michelle, one of my favorite Hong Kong actresses, since they don't seem to involve her in action, I'm not paarticularly concerned about their being deleted. Hopefully, when Fearless comes out on DVD, these scenes will be available in a "full length" version, or at least as deleted scenes. Are you listening Rogue Pictures?

One of Hong Kong's venerable director's, Ronnie Yu, helmed the project. Yu has been working in Hollywood for a number of years, having directed Bride of Chucky (1998) and Freddy Vs. Jason (2003). For me, his greatest achievement is 1993's The Bride With White Hair, which starred the fantastic Brigitte Lin and the great Leslie Cheung, who sadly committed suicide on April 1, 2003. The Bride With White Hair is an operatic tour de force, a definite "must see."

Yuen Wo Ping was the film's action choreographer. By now his name should be getting familiar to Westerners. He was fight, action, or martial arts choreographer on Unleashed, the two Kill Bill pictures, the three Matrix films, and Crouching Tiger, Hidden Dragon.
There's been a lot written about how Jet Li has has stated that Fearless will be his final kung fu film. However, in Asian Cult Cinema #51 (the current issue), Ric Meyers states that this is a misconstual and that Jet said only that this was his "ultimate wushu statement" (Ric's words). Furthermore, Ric says that it was director Ronnie Yu who told him (Ric) that he (Yu) didn't expect to make another kung fu film, as he'd just be repeating himself. I put my trust in my "elder brother" columnist Ric and expect that we'll be seeing more Asian martial arts cinema from Mr. Li.
Fearless has about as perfect a combination of star, director and action choreographer as one could ask for. And Huo Yuanjia's story should be as interesting as that of another Chinese folk hero Wong Fei Hung, who was also portrayed by Jet Li in the best of the series of Once Upon a Time in China films.
Just how good will Fearless be? Well, there's no knowin' 'til the showin'. But I say, never bet against The Jet.
Posted by Dr. Stan Glick at 8:14 AM 1 comment: