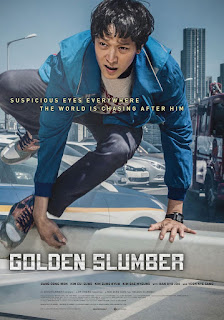 Golden Slumber is a South Korean action thriller packed with twists, turns and deception as a man fights to stay alive after being framed for murder. It will release on Amazon, iTunes and Google Play on June 5, 2018. The film, based on the novel Golden Slumber by Isaka Kotaro, is directed by award-winning director NOH Dong-seok (My Generation).

In Golden Slumber, Gun-woo (GANG Dong-won) is an honest and hardworking courier who even won a Model Citizen Award for saving a singer from a robbery incident. Out of the blue, his old friend Moo-yeol comes to visit him at work. With just a short moment to enjoy the pleasant surprise, Gun-woo witnesses a bombing incident that kills a presidential candidate right before his eyes. Moo-yeol tells Gun-woo that he is responsible for the bombing and that everyone will come after him as it is the agency’s plan to make him the prime suspect.

Gun-woo manages to flee from the scene but all evidence, including security camera footage, witness testimonies and fingerprints point toward him as the suspect. Teaming up with former secret agent Mr. Min (KIM Eui-sung), who is an old friend of Moo-yeol, they work to clear Gun-woo’s name as he fights with all his strength to stay alive. 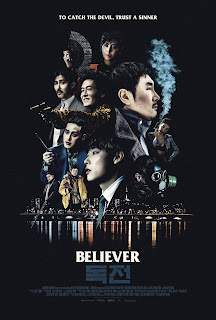 Believer, an action/crime/thriller from South Korea, follows an investigator who, in an effort to bring down the boss of Asia's biggest drug cartel, conspires with a lowly member of the gang seeking revenge against the boss.

Believer will be playing at the following theaters:

Now entering its 12th year, JAPAN CUTS: Festival of New Japanese Film returns to present the best new movies made in and around Japan and the filmmakers and performers who made them, with new titles never before seen in New York and many screening for the first time outside Japan or in North America.

Set for July 19 to 29, the 2018 edition will feature an exclusive premiere roster of nearly 30 feature films, ranging from big budget blockbusters to powerful shoestring indies, and includes spotlights on documentary cinema, experimental films, shorts and recent rediscoveries and restorations of classic Japanese favorites.

With the full schedule to be announced in early June, first highlights include:

KUSHINA, what will you be – International Premiere: A strikingly original debut by promising new filmmaker Moët Hayami, in attendance. Recipient of the 2018 JAPAN CUTS Award at the 2018 Osaka Asian Film Festival.

Also this year, the festival will award the 2018 CUT ABOVE Award for Outstanding Performance in Film to Kirin Kiki (After the Storm, Sweet Bean) — a veteran film and television actor who started her career in the 1960s, best known to international audiences for her memorable work in recent films by leading Japanese directors Hirokazu Kore-eda and Naomi Kawase.

“Kirin Kiki is a legend, and we are so honored to present her with this well-deserved award this year,” says Aiko Masubuchi, Senior Film Programmer at Japan Society. “Despite being on screen for over 50 years, she only continues to impress us with her nuanced, true-to-life performances that elevate every film in which she appears.”

Masubuchi continues, “We still have a lot up our sleeves, but we are so excited to share these first few JAPAN CUTS 2018 titles and guests. It’s a perfect slice of what the festival is all about: bringing the latest in both established and fresh new voices in Japanese cinema and celebrating the diversity it has to offer."

In the run-up to this year's festival, the 2017 JAPAN CUTS Audience Award winner Teiichi: Battle of Supreme High receives an encore screening on Friday, June 15, 7:00 pm as a "JAPAN CUTS Encore" within Japan Society’s Monthly Classics programming.
Posted by Dr. Stan Glick at 12:30 AM No comments:

EVERYTHING GOES WRONG at Japan Society NY this evening

This lesser known early Seijun Suzuki film was produced by Nikkatsu studios in an effort to relaunch the taiyozoku ("Sun Tribe") youth in revolt films that sent shockwaves through Japan in the mid-1950s. Released the same year as Nagisa Oshima's Cruel Story of Youth, Suzuki's film about a rebellious teen who tries to break up his mother's affair with a married man similarly tapped into the restlessness, frustration and violent energy of Japan's postwar youth with a pronounced visual style that signaled the emergence of the Japanese New Wave. Screening in commemoration of star Tamio Kawachi, who passed away earlier this year.
Posted by Dr. Stan Glick at 12:30 AM No comments:

THE MIMIC coming to digital and Blu-ray on June 12th 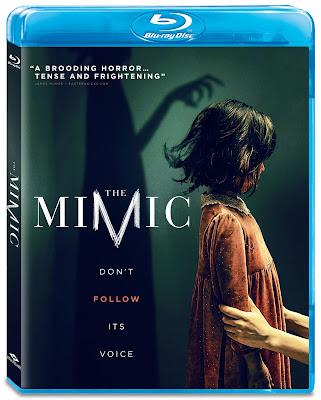 Following the acclaim for his first feature film Hide and Seek, writer/director Huh Jung returns to the genre that made him famous with his sophomore horror-thriller THE MIMIC, generating terror on digital and Blu-ray™ June 12th from Well Go USA Entertainment.

Based on the mythological “Tiger of Mt. Jang,” where a legendary ghost that mimics humans, a woman takes in a lost girl she finds near the mysterious Mt. Jang and mystifying things begin to happen to her frightened family. The Mimic stars Yum Jung-Ah (Tell Me Something), Park Hyuk-Kwon (A Taxi Driver), Shin Rin-Ah (Ode To My Father), Heo Jin (The Wailing), Kil Hae-Yeon (Missing) and Lee Yool (Hello Murderer).

Synopsis:
A classic Korean ghost story gets a horrifying new spin in THE MIMIC, as the mother of a missing child takes in a lost girl she finds in the woods and soon begins to wonder if she is even human.
Posted by Dr. Stan Glick at 8:07 PM No comments: