Korean period drama THE FORTRESS to be released on Amazon, Google Play and iTunes on May 1, 2008

CJ Entertainment will be releasing The Fortress, a period drama featuring popular South Korean actor, LEE Byung-hun, best known for Magnificent Seven and Terminator Genisys on Amazon, Google Play, and iTunes on May 1, 2018. This title played in 18 cities across the U.S. and Canada last Fall. It was the main feature of Korean Film Days at the Asian World Film Festival in Los Angeles, and also opened at the London East Asia Film Festival (LEAFF) in London last year. The cost is $14.99 to purchase High Definition (HD), $9.99 to purchase Standard Definition (SD), $4.99 to rent High Definition (HD), and $3.99 to rent Standard Definition (SD).

The Fortress is set in 1636, when the Chinese Qing Dynasty has invaded Korea with 150,000 troops. The Korean court flees the capital to take shelter in the Namhan Fortress, located in treacherous mountains outside the city. The Qing army, led by General Yong Gol Dae, quickly surrounds the fortress, leaving the king and the court stranded in a prolonged standoff. For a truce, the Qing general makes a humiliating proposal that they send the Crown Prince out as hostage. Unable to move forward or fight the enemy they are outnumbered by, the people of the fortress start dying from cold and hunger. The king now faces an impossible choice between protecting his people and standing up to those looking to destroy them.

This film is directed by esteemed director HWANG Dong-hyuk (Miss Granny, Silenced, My Father). His 2014 hit Korean comedy, Miss Granny (Chinese version) reached $55M in the box office and has been remade for Japan, Vietnam, and several other countries. It was remade in English with Tyler Perry’s 34th Street Films and in Spanish with Eugenio Derbez’s 3pas Studios.

HWANG’s new period drama also stars KIM Yoon-seok (Will You Be There?, The Priests, Haemoo), PARK Hae-il (The Last Princess, Eungyo, War of the Arrows) and GO Soo (The Royal Tailor, Way Back Home, The Front Line).
Posted by Dr. Stan Glick at 12:30 AM No comments:

THE SPY GONE NORTH invited to the 71st Cannes Film Festival; will be released in the U.S. Summer 2018

CJ Entertainment has announced that its highly anticipated espionage film, The Spy Gone North (Gongjak), is releasing in the U.S. this Summer. The film has been invited to the Midnight section of the 71st Cannes Film Festival, which is taking place May 8-19. Directed by YOON Jong-bin, this is his second invitation after The Unforgiven in 2006. Starring HWANG Jung-min (“The Battleship Island, The Wailing), LEE Sung-min (The Sheriff in Town, A Violent Prosecutor), CHO Jin-woong (“The Handmaiden,” “Bluebeard), and JU Ji-hoon (“Along with the Gods: The Two Worlds, Asura: City of Madness). This is HWANG and CHO’s second invitation to the festival as well. CJ E&M now has a total of nine titles that have been invited to the Cannes Film Festival.

Director YOON (Kundo, Nameless Gangster) delivers a gripping, fact-based spy saga about a loyal South Korean agent caught in the political vortex plotted by the ruling classes of two Koreas. In 1993 Korea, the only country where the Cold War continues, tensions surrounding the development of nuclear weapons escalate. Seok-young Park, an army major in the South Korea military intelligence with the code name 'Black Venus' is assigned a mission to infiltrate the North Korean nuclear facility. Seok-young disguises himself as a South Korean businessman working on a collaborative project with North Korea, and approaches Myung-woon Lee, a North Korean high official based in Beijing. After laying down groundwork for years, Seok-young finally manages to win the North Korean ruling class' trust and secure a contract for joint advertising. However, Seok-young soon discovers that both North and South Korea are making secret deals for their own interests in the 1998 South Korean presidential election.
Posted by Dr. Stan Glick at 12:30 AM No comments: 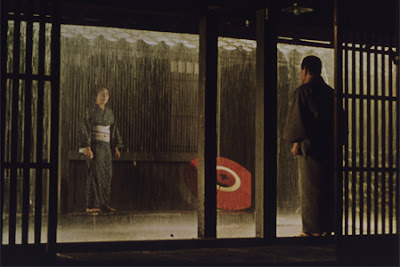 
Japan Society will screen 10 more of Miyagawa's greatest works over the next two weeks, including Rashomon (1950), The Rickshaw Man (1943), and Ballad of Orin (1977). Advance ticket purchase is recommended.

Note that co-organizer The Museum of Modern Art will host repeat screenings and additional Miyagawa retrospective titles from April 12-29. Preceding the retrospective, new 4K restorations of Mizoguchi's A Story From Chikamatsu and Sansho the Bailiff, both shot by Miyagawa, will run at Film Forum from April 6-12.
Posted by Dr. Stan Glick at 12:30 AM No comments:

THE MONKEY KING 3 debuts on digital, Blu-ray™ & DVD May 15th 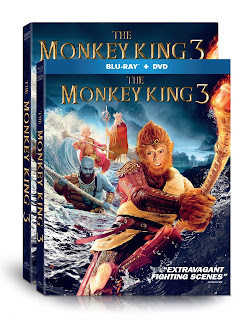 A small portion of the epic 16th-century Chinese 100-chapter novel Journey to the West again provides the story, picking up where the previous films left off with the Impish magical primate and his motley crew of colorful followers accompanying a monk on a mission to retrieve sacred scriptures. In this installment, they find themselves trapped in a land inhabited only by women.

Synopsis:
The third installment of the blockbuster fantasy series sees the return of the Monkey King (Aaron Kwok) in his most action-packed adventure yet! While continuing their epic journey to the West, the Monkey King and his companions are taken captive by the Queen of an all-female land, who believes them to be part of an ancient prophecy heralding the fall of her kingdom. With a lot of sorcery and a little bit of charm, the travelers devise a plan to escape. But, when their trickery angers the mighty River God, they realize they might just bring about the foretold destruction - unless they can find a way to quell her wrath.
Posted by Dr. Stan Glick at 12:30 AM No comments:

In celebration of the 110th anniversary of his birth, Japan Society will present an 11-film retrospective surveying the work of Kazuo Miyagawa (1908-1999), the most influential cinematographer of postwar Japanese cinema. Working intimately with directors like Yasujiro Ozu, Akira Kurosawa, Kenji Mizoguchi and Kon Ichikawa on some of their most important films, Miyagawa pushed Japanese cinema to its highest artistic peaks through his lyrical, innovative and technically flawless camerawork. This career-spanning selection displays his great versatility, including major masterpieces and rarely shown titles, screening in 35mm and new digital restorations.

For further information, a complete list of the films that will be shown at Japan Society and to buy tickets for screenings there, click here.

Note that co-organizer The Museum of Modern Art will host repeat screenings and additional Miyagawa retrospective titles from April 12-29. Preceding the retrospective, new 4K restorations of Mizoguchi's A Story From Chikamatsu and Sansho the Bailiff, both shot by Miyagawa, will run at Film Forum from April 6-12.
Posted by Dr. Stan Glick at 12:30 AM No comments:

PARADOX, the third installment in the SPL series, will be available on digital, Blu-ray & DVD on May 8th 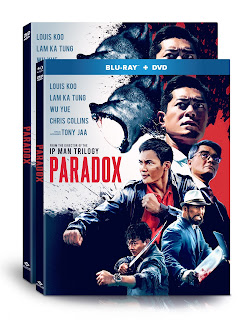 PARADOX is the third installment of the SPL film series, following the 2005’s SPL: Sha Po Lang and 2015’s SPL II: A Time for Consequences.

Synopsis:
Hong Kong cop Lee (Louis Koo) goes on a search in Thailand for his missing daughter Chi (Hanna Chan). Thai Chinese police officer Chui Kit (Wu Yue) lets Lee join the investigation, having no idea that Lee is going to use the mass media to hunt for clues. A short clip which accidentally filmed Chi’s capture is uploaded to the police website, but subsequently deleted. Chui Kit and colleague Tak (Tony Jaa) tracks down the clip owner, but the evidence is destroyed before they can stop it. The duo begins tracking down the culprit. As they get closer to the truth, they realize that the case is more complicated than they expected, and the mastermind behind the scene is not someone they can deal with...
Posted by Dr. Stan Glick at 12:30 AM No comments: