The New York Korean Film Festival 2007 will present fifteen feature films and more from August 21st thru September 2nd. Screenings will take place at three venues: Cinema Village, IFC Center, and BAM cinematek at BAM Rose Cinemas. This marks the seventh year of the NYKFF, once again bringing the best in Korean Cinema to America.


The festival is set to include:
- 15 feature films
- A 5 film retrospective of works by Im Kwon-taek
- Korean Horror Day, a collection of 7 films presented courtesy of
Tartan Asia
- A short film festival
- Panels, discussions, filmmaker appearances, parties and more. 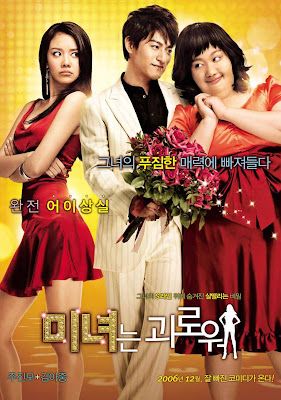 The Cinderella (or perhaps it should be "slenderella") comedy
200 Pound Beauty
is one of the fifteen feature films that will be screened.

AsianCineFest will have "Preview Reviews" and further info, so come back regularly.

For the festival's home site, click on: NYKFF 2007
And be sure to check out the NYKFF Festival Trailer.


The New York Korean Film Festival 2007 is presented by Helio.
Posted by Dr. Stan Glick at 5:11 PM No comments: 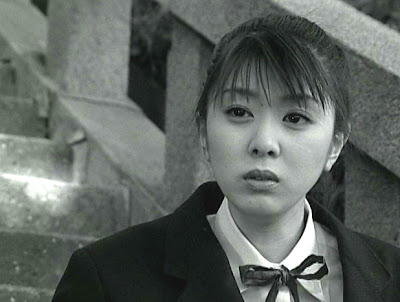 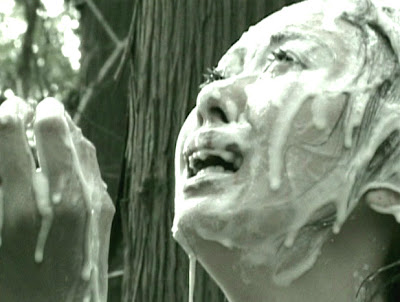 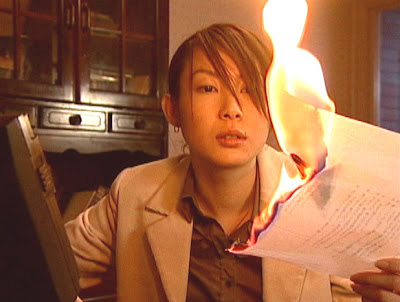 Don't bother with this movie.
There you have it in one simple five word sentence. However, since I spent the 90 or so minutes it took to watch the whole thing, I might as well offer a few comments. Feel free to read on, or to check out another of my postings. Frankly, I suggest the latter, but here goes.
Ghost Gate is a recent J-Horror release about five youths, three girls and two guys, who enter a mansion where a murder took place fifteen years earlier. A famous novelist's female assistant/secretary had been killed in a locked room, and the novelist had disappeared at the same time. The youths hope to solve the mystery and to claim the large reward that's been offered.
Of course, they start dying one-by-one. And of course, there's a female ghost with long straight hair, though at least it doesn't hang down in front of her face.
The main problem with this movie, which was shot on video and has a standard TV 4:3 aspect ratio, is that it isn't the slightest bit scary! The film also violates the second most important rule for this genre, which is that the young females must show some skin! Not nudity necessarily, but at least some flesh for us horn-dogs to feast upon. Alas, all three girls, while nice looking, are ultra-conservatively dressed.
Beyond that, the dialogue - to use the term loosely - totally sucks. For example, upon entering a room, one character asks, "Where are we?" You're in a room, dummy!
At another point, one of the guys asks one of the girls, "Why'd you ask me that question?" The female replies, "What question was that?" And after a pause, the guy says, "Yes." Scintillating!
And take my word for it, the "acting' is on a par with the dialogue, totally amateurish.
Somewhat amusing was the inconsistency of there being cobwebs that the youths have to brush aside, yet all the surfaces in the house were totally dust-free.
Info about this horrible movie is hard to come by. The film is not listed at imdb. I did come across one indication on the web that the director is a Makoto Yamaguchi, whoever he or she is. There are three people by that name listed at imdb, but it's not evident if any of them are this director. One of the actresses is Miho Yabe, who at least has a listing at imdb, though it's pretty minimal.
The DVD of Ghost Gate is being distributed by Laguna Productions, a company that specializes in releases for the Latino market and that is obviously looking to expand into other genres. It's not likely that this release is going to help in that regard.
If for some bizarre reason you're interested in checking Ghost Gate out, be advised that some info, including the Laguna website and amazon.com, indicate that it's in Japanese with English subtitles. However, the screener I received from Laguna was English-dubbed only, so I have my doubts.
The one thing I don't have a doubt about is that there are way more better things that you can spend your time and money on. Just because I squandered 90 minutes watching this in its entirelty so I could be sure about it, you don't have to to.
Ghost Gate gets a 1/2 out of 4 star ACF rating; strongly not recommended.
Posted by Dr. Stan Glick at 12:48 PM No comments: 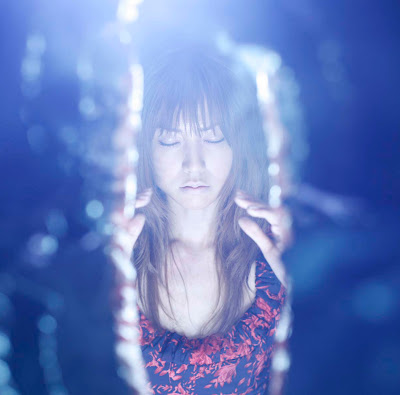 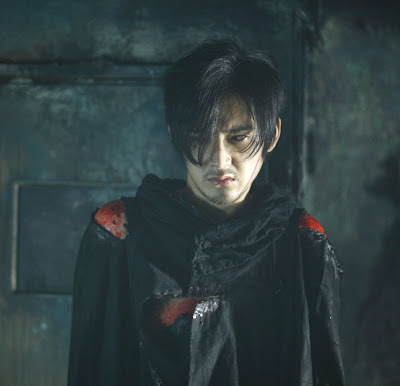 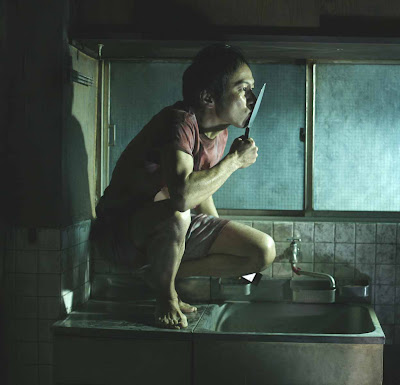 Kagenuma is a sad, suicidal young man with a special ability: he can enter people's dreams and interact with them there. It's not his profession, and it's often dangerous, but he does it at times to help troubled individuals.

A mysterious individual known only as "0" ("Zero") appears to be involved in the brutally violent deaths of two apparent suicides. He somehow uses cellphone calls to get the would-be suicides to follow through on their inclinations, even if they really don't want to die. Guess this makes him a sort of Suicide Svengali.

Keiko Kirishima is a new detective who requested a transfer from her successful but unfulfilling work at the National Police Agency. She wanted something "tangible" but in this, her first "real" case, she's confronting the supernatural.

Keiko asks for Kirishima's assistance, but he initially refuses. He changes his mind and reluctantly agrees to help after first another detective, a handsome youngster named Wakamiya, and then Keiko herself place cell phone calls to "0" to lure him out, thereby putting themselves - surprise! - in grave danger.


Part police procedural, part X-files take-off, Nightmare Detective is a full bore thriller and psychodrama. It gets an 3.5 out of 4 star ACF rating (very highly recommended).

Hitmoi (born January 26, 1976) is a popular Japanese singer, songwriter, record label owner and executive, and animal rights activist. Her career is remarkable for its longevity and the fact that she's married, has children (twins), and took about a year and a half off from recording and performing during her pregnancy and after the children's' birth. Her only previous film work was in the "Nowhere" segment of the 2003 film Life Is Journey.

That makes Nightmare Detective her first substantial role and she acquits herself quite well. Somewhat slack-jawed, her mouth is often slightly opened, giving it a very sensual quality. I was particularly impressed with her handling of a difficult, lengthy scene in which all she has to react off of is "0"s voice on her cellphone.

Ryuhei Matsuda (born May 9, 1983) is a terrific young actor. I first came across him in the 2004 film Koi no mon (a.k.a. Otakus in Love) in which he played a young manga artist who puts his work on rocks! His filmography runs to 25, including Nightmare Detective 2 which is in pre-production and set for a 2008 release.

Shinya Tsukamoto (born January 1, 1960) is an extremely mulit-talented individual. As an actor he's appeared in 30 pictures, including Koi no mon and Ichi the Killer (a fave of mine). In addition to Nightmare Detective, he's appeared in, directed and written Tokyo Fist, the two Tetsuo films, Soseiji (a.k.a. Gemini, 1999, another fave), and the aforementioned upcoming Nightmare Detective 2. 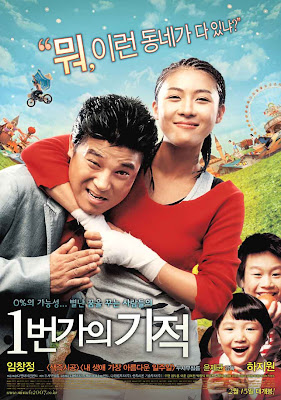 Following its New York Premiere at the New York Asian Film Festival on June 25th, this 2007 Korean film is set for an exclusive theatrical run at The ImaginAsian in New York for one week starting July 6th.
Pil-je (actor Chang Jung Lim) is sent to get a group of have-nots to move from their "homes" on the fringe of Seoul so their land can be developed by ruthless real estate barracudas. Reluctant to give up what little they have, the residents don't cave in. 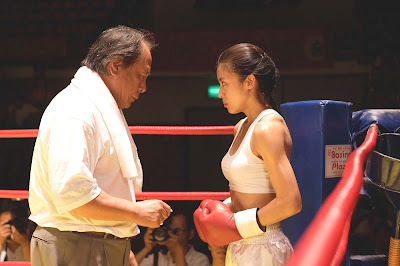 Pil-je brings in amenities, such as electrical power and the Internet, to make things comfortable for himself, but this inadvertently leads to him becoming a hero to the populace. Meanwhile, he becomes smitten by the beautiful Myung-ran (actress Ji-won ha), who longs to become a boxer like her father.

Of course, the gangsters eventually decide that Pil-je has had more than enough time, and decide to resort to rougher tactics. Mayhem ensues.