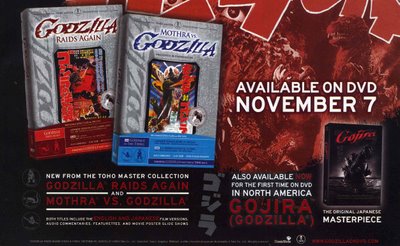 Last night after having posted ACF 012, I saw a print ad for two more Godzilla flicks coming out on DVD on November 7th, Godzilla Raids Again and Mothra vs. Godzilla. Check out distributor ClassicMedia's official website godzillaondvd.com for info, articles, trailers and more about Gojira/Godzilla and the upcoming releases.
Posted by Dr. Stan Glick at 1:46 PM No comments:

Email ThisBlogThis!Share to TwitterShare to FacebookShare to Pinterest
Labels: Godzilla 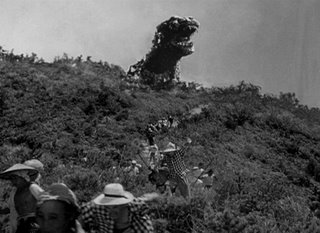 The "Big G" first shows his face and
the villagers of Odo Island flee in terror! 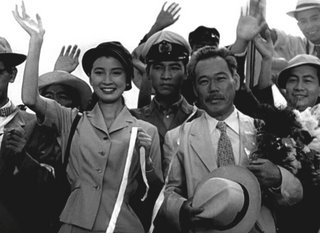 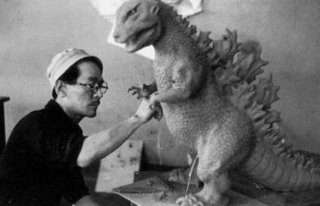 No, it's not a new Godzilla movie. It's the face-off of Gojira, the original 1954 Japanese film (not the 1984 film with the same title) and the 1956 revised U.S. version, Godzilla, The King of Monsters! in a recently released two DVD set.

The story in brief:

In the aftermath of nuclear testing in the western Pacific Ocean, a stange phenomenon begins to sink ships. On nearby Odo Island, villagers believe it's the return of Gojira (Godzilla in English), a mythic beast to whom young women used to be sacrificed. Soon the creature appears, causing condsiderable death and destruction on the island. "Big G" then moves on to Tokyo, where he arises from the waters of the bay, spewing his radioactive breath, wrecking havoc, and proving impervious to the weapons of the Japanese Self-Defense Forces. Can some way be found to defeat him before all of Tokyo, then Japan, then the world is destroyed? Of course, otherwise we wouldn't be around to enjoy this, the first of the Rubber Suit Monster Movies, or it's many successors and variants.

I was about 8 years old when the U.S. version was released and may have seen it in theaters. In any case, I've watched it numerous times over the years on broadcast TV, and more recently on a VHS tape. The original Japanese version reportedly was shown in limited release in the U.S. a bit before the American version came out, and again in 2004, but I had never seen it. Eager to see the original, I bought this DVD set the first day it became available. Watching the original Japanese version was a revelation.

Make no mistake: it's still a rubber suit, B-movie with special effects that are quaint at best and most often laughable, even allowing for when it was made. Planes, tanks and helicopeters are clearly small toys. Wires manipulating Gojira's tail and other objects are clearly visible at times. (For an extensive list of trivia and goofs, see the imdb entries for Gojira and for Godzilla, the King of the Monsters!)

Still the original version proved to be more than just a B-movie. And, not surprisingly, it's much better than the U.S. version.

First off, the role of nuclear testing in calling forth Gojira's rampage is clearly and strongly made, whereas in the American version it's referred to in only one line that I noticed. Also, there are many more shots of the suffering of the victims of Gojira's attacks on Tokyo. In this regard, it's worth mentioning that after Japan's surrender ending World War II, Gojira director Ishiro Honda, who had been a foot soldier in China, passed through Hiroshima and witnessed first hand the effects of the atomic bomb's explosion there.

There's also much more human character and plot develoment in Gojiro than in Godzilla. The original has a running time of 98 minutes. The U.S. version clocks in at about 80 minutes, but actually used only 60 or so minutes of the original. The remaining 20 minutes are scenes shot by journeyman director Terry O. Morse. They feature actor Raymond Burr (the villain in Hitchcock's Rear Window and later the lead on the TV series Perry Mason and Ironside) as reporter "Steve Martin." His fateful stopover in Tokyo while en route to Cairo enables him to narrate the course of Godzilla's rampage.

Because of the 30 more minutes of original film in Gojira, we're also treated to much more of Akira Ifukube's fabulous score. On these discs the music also sounds louder in the original's audio mix than in the U.S. version. Ifukube's Gozilla theme is every bit as unmistakeably identifiable as that for the shark in Jaws. There's a terrific soundtrack DVD available, entitled Godzilla: 50th Anniversary Edition.

When I watched Godzilla, The King of the Monsters, I was surprised that the "made for American consumption" version didn't suck, which I'd expected it to after having watched Gojira. Sure, it's clearly inferior to the original. The inserted scenes weaken the story line, and the narrative of Burr's "Steve Martin" interrupt and slow down the pacing. The dubbing is conventionally poor and internally inconsistent. Japanese talking to Japanese speak Japanese early in the picture, with "Martin" (and us) getting the dialogue translated by a bilingual character. Later these same characters speak to their fellow countrymen in English.

On the other hand, there clearly was a lot of thought and care given to making the inserted scenes match the original shots as good as possible. The stand-ins for the original Japanese actors were the right size and dressed consistently with their counterparts. Morse reportedly was selected to direct because he had been an editor for many years and also had directed low budget movies. So I totally disagree with the reviewer in Premiere magazine who recently wrote that this version was "clumsily edited."

According to the commentary on the Godzilla disc, it was actually the U.S. version that was primarily responsible for the film's international success and longevity, and I can see the likely truth in this. Objectively speaking, I can't imagine that the original would have had any commercial success in America in the '50s. A revised version tailored for the American audience was essential, and a decent job was done, given the available budget, which must have been small, if not minimal.

For the most part, this 50-some year old B-movie has been decently cleaned up for its DVD premiere, but there are numerous white flecks and other visually distracting artifacts. Not enought to ruin one's viewing, but enough to be noticeable. "Big G" deserves better; maybe he'll get it when a high definition version is released further down the line.

There are a few decent extras. Godzilla experts Ed Godziszewski, author of The Illustrated Encyclopedia of Godzilla and Steve Ryfle, author of Japan's Favorite Mon-star (The Unauthorized Biography of Godzilla), contribute commentaries. There are short featurettes on the creation of the original story and of the rubber suits. Also included is an informative booklet written by Ryfle.

Fans can rejoice that Gojira and Godzilla, The King of the Monsters! are finally available on DVD in quite decent, if not spectacular, transfers. The two-disc set is a worthy addition to the collection of anyone who loves "Big G" or who cares about the history of Japanese films. Gojira was a nominee for the Japanese Academy Award for best picture, which not surprisingly went to Akira Kurosawa's Seven Samurai. Still it was nominated, the only Godzilla picture to be so honored, and it did receive the award for Best Special Effects. It's a seminal and important movie. If you don't buy the set, at least find a way to watch the original version. It's must viewing, and if you've only seen the Raymond Burr version, you'll probably find it a revelation just like so many others and I have.