New York Japan CineFest, the annual mini-festival of recent shorts by emerging Japanese and Japanese-American filmmakers, will return to Asia Society NYC for the eighth time next Wednesday, June 5th and Thursday, June 6th. There will be separate programs each day beginning at 6:30 PM. The Day 1 Program on Wednesday will be followed by a reception.

Information about the Day 1 Program can be found here; Day 2 Program info is available here. 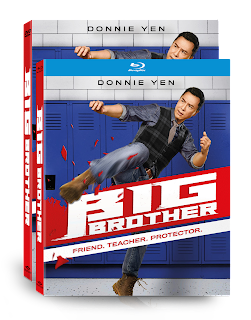 Big Brother, a rather different film vehicle for action star Donnie Yen, debuts on Blu-ray and DVD today, May 21st from Well Go USA Entertainment. (It's been available on digital since April 16th.) My review is based on watching the Blu-ray version.

Here Yen stars as Henry Chan, a former soldier who manages to secure a position teaching a class of problematic teenage delinquents. His unconventional approach, which includes caring involvement with his students' lives outside the classroom, proves surprisingly effective. The reasons for his taking the job and caring so much become apparent as Chan's back story is gradually revealed over the course of the film.

Think of the movie as a Chinese version of the 1967 film To Sir, with Love, which starred Sidney Poitier as a teacher of troubled white students from the slums of London's East End. Only Big Brother, since it stars Donnie Yen, has a couple of ass-kicking action sequences that feature Yen taking on both multiple and individual opponents.

AsianCineFest Rating: 3 out of 4 stars; while not your typical Donnie Yen film, it's a touching "feel-good" film with some nice action scenes.
Posted by Dr. Stan Glick at 12:30 AM No comments: 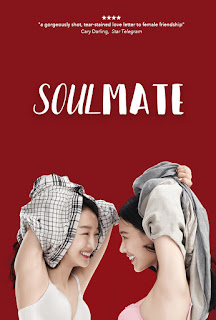 SoulMate, a highly regarded drama from director Derek Tsang, will be coming to DVD in the USA and Canada on June 14th, 2019.

Featuring unforgettable performances from Zhou Dongyu and Ma Sichun, who made history by tying for "Best Actress" at the biggest Chinese film award, the film portrays the decades-long friendship between two disparate women who both struggle to find positions for their real selves in the modern world. The poignant drama is a heartfelt tribute to everyone's best friend and an honest examination of the evolving gender role in fast-changing China.

THE UNITY OF HEROES to debut on digital, Blu-ray™ Combo Pack and DVD on May 28th from Well Go USA 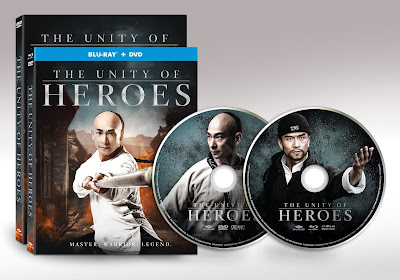 The Unity of Heroes
Directed by Lin Zhenzhao
China, 2018, 104 minutes

Vincent Zhao (Once Upon A Time in China) reprises his role as legendary folk hero Wong Fei Hung in The Unity of Heroes, debuting on digital, Blu-ray™ Combo Pack and DVD on May 28th from Well Go USA Entertainment. In this action-packed adventure, a highly toxic drug has permeated the country and Wong Fei Hung and his students must stop the invasion.


Synopsis:
A shipment of a narcotic more dangerous than opium is about to be distributed across the country by a corrupt pharmaceutical company. In the face of foreign and domestic enemies, can Wong Fei Hung stop the spread of this dangerous narcotic and save lives in time? 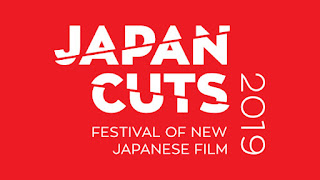 Japan Society NY has announced this year’s dates for JAPAN CUTS. The 13th iteration of the largest festival of contemporary Japanese cinema in North America will run July 19-28, 2019 . With a wide range of the best and hardest-to-see films made in and around Japan today — from blockbusters to independent productions, documentaries to avant-garde works, and short films to new restorations — JAPAN CUTS is the place to experience Japan’s dynamic film culture in New York City.

The full schedule will be announced in early June. Sign up for the Film enewsletter for updates!

3-FILM PASS: $2 off each ticket when you purchase tickets for at least three different films in the same transaction! (Offer not valid for Opening Night and Centerpiece Presentation.)

*Note: All pricing is subject to change.

TRIPLE THREAT reviewed; available today as a Blu-ray + DVD combo pack and as DVD only 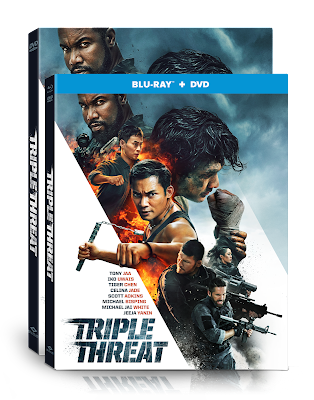 As the screen capture above indicates, the film asks the question, "Why the fuck is it so hard to kill one little Chinese girl?" The female in question is Xian (actress Celina Jade), a billionaire's daughter who wants to rid a fictitious country of the influence of an immensely powerful criminal syndicate. The triple threat of the film's title consists of Tony Jaa, Iko Uwais, and Tiger Chen, who come to protect her from assassins hired by the head of the nefarious organization.

Triple Threat totally delivers terrific action and is a must see for fans of the genre.

Watch the Triple Threat trailer here.
Posted by Dr. Stan Glick at 12:30 AM No comments:

MISS & MRS. COPS, a South Korean Crime Comedy, Releases in Los Angeles today, May 10th and in Cities Across the U.S on May 17th 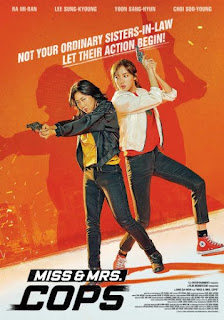 South Korean Director JUNG Da-Won is back with his second feature film Miss & Mrs. Cops. The film opens today, May 10th at CGV Cinemas in Buena Park and Los Angeles and will be available nationwide on May 17th.

In the film, two sisters-in-law (Mi-Young and Ji-hye) who work together at the police department find themselves in the middle of a suicide case when a young woman throws herself in front of a bus while the two are on duty. Mi-young and Ji-hye find out that the woman is the victim of a digital sex crime and her sex video is scheduled to be released online in 48 hours. When all the other departments refuse to take the case, the sisters-in-law open their own investigation into the case.
Posted by Dr. Stan Glick at 12:30 AM No comments:

Clad in a black leather jacket, renowned Japanese writer Yukio Mishima struts and preens as a small-time yakuza underboss in this oddity of postwar Japanese cinema directed by Yasuzo Masumura. Fresh out of jail and hiding out above a rundown Tokyo movie theater, the unsympathetic tough is hounded by a rival gang and an asthmatic killer-for-hire as he struggles to reconcile his criminal life with a newfound love interest (Ayako Wakao).

Afraid to Die screens in celebration of a brand new English translation of Mishima's 1961 novella Star (New Directions Publishing, 2019), a fictionalized account of his experience working on Masumura's film.

There will be an introduction by Star translator Sam Bett, followed by a book-signing. Copies of Star will be available for purchase courtesy of New Directions Publishing 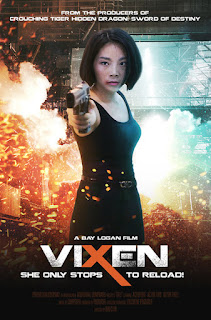 Synopsis:
Vixen is a femme-centric Hong Kong action film about a Chinese security expert who fights a lone battle against a European criminal gang that has seized the world’s tallest building, where a massive, high-tech international conference is taking place. With the building under lockdown, the lone expert, Sunny Liu (former stuntwoman Li Ran) must use all her courage, intelligence and martial arts prowess to outwit, outlast and outfight the terrorists. She’s beautiful, she’s deadly, and she always knows – a woman’s work is never done.
Posted by Dr. Stan Glick at 12:30 AM No comments: