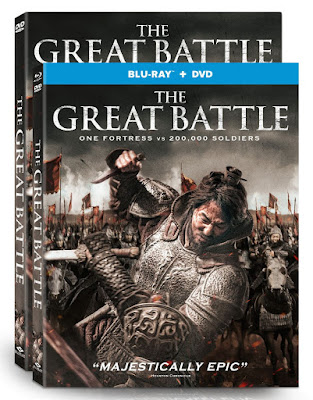 Director Kim Kwang-Sik (My Dear Desperado) brings to life the first Korean action blockbuster to depict the Korean Goguryeo dynasty in the epic story The Great Battle. It will be available on digital, Blu-ray™ Combo Pack and DVD starting January 8th, 2019 from Well Go USA Entertainment.

Set during the Chinese Tang dynasty, the action-packed film is based on the historic 80-day battle between the Goguryeo and Tang forces known as The Siege of Ansi, that took place while the two groups were at war between 645-668 AD. Kwang-Sik uses cutting-edge cinematic technologies to create spectacular action sequences.

The film stars Zo In-Sung (The King), Nam Joo-Hyuk (the TV series Bride of the Water God) and Park Sung-Woong (The Swindlers). The discs also come with a behind-the-scenes featurette with commentary from the director and cast.

Synopsis:
With epic scale and breathtaking action, The Great Battle tells the story of the Siege of Ansi, where Goguryeo forces held their fortress against 200,000 invading Tang soldiers in a battle that raged for 88 days.
Posted by Dr. Stan Glick at 1:30 AM No comments:

MISHIMA: A LIFE IN FOUR CHAPTERS at Japan Society on Friday, January 11th, 2019

This unconventional, visually stunning biopic directed by Paul Schrader (presented in a new 4K restoration) deconstructs the life and work of Japanese writer and outspoken ultranationalist Yukio Mishima—who famously killed himself in a public act of seppuku (ritual suicide) after he failed to incite a military coup—through a dazzling assemblage of biographical dramatization and extravagantly stylized interpretations of his fiction.

This screening is presented in conjunction with the current Japan Society exhibition Yasumasa Morimura: Ego Obscura, which runs through January 13. In his artistic exploration of postwar Japanese history, Morimura has repeatedly transformed himself into Mishima, including works featured in the exhibition.

AsianCineFest Rating: 4 out of 4 stars; most highly recommended, a must see.
Posted by Dr. Stan Glick at 12:30 AM No comments:

DIDI'S DREAMS, a Chinese fantasy comedy, is available at Amazon Video and Vimeo on Demand

With this one-of-a-kind fantasy comedy, talent from the most influential Chinese language TV show Kangsi Coming pay tribute to the golden age of Taiwan variety entertainment. Didi is an aspiring actress who keeps having the same dream about a spaceship noodle shop owner's love affairs. After countless hardships, she finally reaches her career breakthrough, but her life takes an unexpected turn, and the truth about her dreams start to unveil. 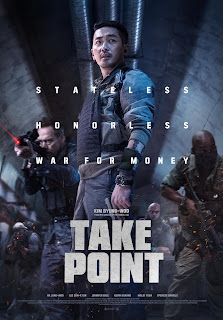 South Korean director KIM Byung-woo known for his award-winning film “The Terror Live,” is back with the release of his new action thriller, “Take Point.” This title releases in Los Angeles on December 27th and in cities across the U.S. and Canada on January 4th. It will have audiences at the edge of their seats as they follow Captain Ahab on a CIA mission that he may not get out of.

On the day of the U.S. presidential election in 2024, Captain Ahab (HA Jung-woo), who works for private military company Black Lizard, and his team of elite mercenaries embark on a secret CIA mission to abduct North Korea's Armed Forces Minister in an underground bunker below the Korean Demilitarized Zone (DMZ). The mission derails when the target turns out to be none other than Supreme Leader of North Korea himself, who has an incredibly high bounty on his head.


Ahab and his 12 men go in for the jackpot against the CIA’s wishes. Unbeknownst to them, another PMC squad is after the same target and Ahab has to work around CIA’s aerial strikes that put him and his men in immediate and present danger. The bunker is demolished and Ahab is in critical condition. When the Supreme Leader suffers a devastating injury, he has no choice but to team up with an elite North Korean doctor (LEE Sun-kyun) to not only save himself but his target and get out of the bunker in one piece.

More information and the list of theaters is available here.

THE STORMY MAN at Japan Society this Saturday and Sunday

In the movie that made him a star, Ishihara plays a rough-hewn drummer out to make it in the seedy Ginza jazz world. An enormous success, The Stormy Man was Japan's third-biggest box-office hit of 1957, made the Nikkatsu studio solvent and solidified Inoue's reputation as a maker of hit musicals. For its young audience, who clapped and cheered as Ishihara sang "I'm a drummer, a no-good drummer," the movie was an event and a generational marker. Today it still packs musical excitement — and presents Japan's premier screen idol at his most charismatic.

Special Offer: Purchase all 3 Umetsugu Inoue films in the same transaction and receive $2 off each ticket!
Posted by Dr. Stan Glick at 2:36 PM No comments:

The Eagle and the Hawk / Washi to Taka

A high seas adventure, murder mystery and revenge-driven melodrama all rolled into one, Inoue's follow-up to The Winner casts Ishihara as a cocky, musical seaman who joins the crew of a rusty cargo ship headed to Hong Kong. Amidst fist fights and scuffles along the way, two women on board vie for the ukulele-playing sailor's attention: a sultry stowaway and the captain's high-spirited daughter, who is also pursued by the ship's first mate. Morally ambiguous, Ishihara's character offered something new to Japanese cinema: a dirty hero with his own sense of justice and a way with song.

Special Offer: Purchase all 3 Umetsugu Inoue films in the same transaction and receive $2 off each ticket!
Posted by Dr. Stan Glick at 1:36 PM No comments:

THE WINNER at Japan Society this Saturday and Sunday

Eikichi, a nightclub owner and former boxer with unrealized dreams of being a prizefighter, picks up a talented but wildly undisciplined amateur fighter (Yujiro Ishihara) and decides to mold him into a champion. When a beautiful, destitute ballerina also comes under Eikichi's tutelage, however, romantic entanglements and jealousies threaten to undo his vicarious triumph in the ring. A box office success upon release, The Winner proved to Inoue's satisfaction that Ishihara could carry a film (though his studio bosses needed more convincing). It also established the action-with-musical-interludes template for dozens of Nikkatsu films to come.

Special Offer: Purchase all 3 Umetsugu Inoue films in the same transaction and receive $2 off each ticket!
Posted by Dr. Stan Glick at 12:36 PM No comments: