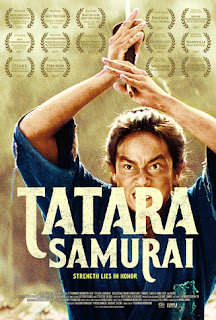 Following a massively successful festival circuit, ELEVEN ARTS has licensed North American distribution rights to Yoshinari Nishikori’s award-winning period action-drama TATARA SAMURAI. The Los Angeles-based distribution company, whose recent titles include THE LEGEND IS BORN: IP MAN, UZUMASA LIMELIGHT, and SAILOR MOON R: THE MOVIE, has set June 2nd for the theatrical release of the film in the U.S., which is produced by EXILE HIRO.

Synopsis:
Gosuke (Aoyagi), a young villager in Sengoku Period Japan, is trained to be a blacksmith, but seeks to become a warrior. After joining the army of Oda Nobunaga, he begins to question whether swords are a viable defense against the new technology of firearms - but soon discovers that his skill as a blacksmith might very well be the most powerful weapon he has to protect his home.

For a list of the cities and theaters where Tatara Samurai will be playing, click here.
Posted by Dr. Stan Glick at 12:30 AM No comments:

SEOUL STATION is now available in U.S. exclusively on iTunes 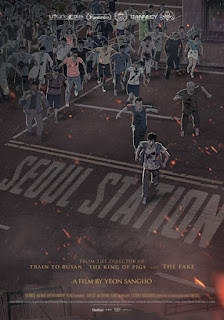 Seoul Station, the animated prequel to the live-action hit Train to Busan arrives on iTunes exclusively in the U.S. today, Tuesday, May 30th. Both films are from visionary director Yeon Sang-ho, who also directed The King of Pigs (2011) and The Fake (2013).


Seoul Station is a fresh and terrifying take on the modern zombie film. Lots of thrills, chills and surprises.

AsianCineFest Rating: 3.5 out of 4 stars; highly recommended
Posted by Dr. Stan Glick at 12:30 AM No comments:

Winner of the inaugural JAPAN CUTS Audience Award in July 2016, the irresistible crowd-pleaser Flying Colors returns to Japan Society for an encore screening in anticipation of the upcoming 11th edition of JAPAN CUTS. Based on an inspiring true story, this smash-hit comedic drama stars Kasumi Arimura as a ditzy high school material girl who is unexpectedly encouraged by an overly-optimistic and unconventional cram school teacher to apply for admission to one of the toughest universities in Japan. Full of heart and big laughs, Flying Colors could easily be considered Japan's winking response to Legally Blonde.
Posted by Dr. Stan Glick at 3:09 PM No comments:

RAILROAD TIGERS debuts on digital today; will be coming to Blu-ray & DVD on June 20th 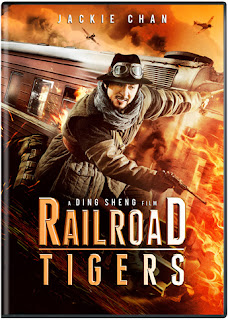 Synopsis:
In this action-comedy caper hearkening back to Jackie Chan’s classic Hong Kong films, a railroad worker (Chan) and his ragtag group of freedom fighters find themselves on the wrong side of the tracks when they decide to ambush a heavily armed military train filled with desperately needed provisions. Unarmed and outnumbered, they must fight back against an entire army using only their wits, in a series of dazzling set pieces and action scenes rivaling anything seen on the big screen.

Last Friday, April 28th, I had the extremely good fortune of having a press seat at Japan Society's presentation of Godzilla Legend - Music of Akira Ifukube, a live performance by the innovative and talented Japanese band Hikashu, which was founded in 1978, and several guest artists.

The Godzilla Legend project leader was Inoue Makoto, a founding member of Hikashu, who plays synthesizer. Although he left the group in 1991 to pursue other projects, he still performs with them for the Godzilla Legend concerts. He arranged several Ifukube compositions for Hikashu's debut concert and has been involved in several other Ifukube-related projects, as well as serving as score manager on the Shin Godzilla film (2016). At Friday night's performance, he also provided brief introductions to the event's six sections.

The current members of Hikashu include:

Appearing as guest artists were:

If you are familiar with Frank Zappa and his group the Mothers of Invention, and can imagine him as a Japanese musician in love with Ifukube's Godzilla music, you'll have some idea of what the performance was like. If I had to use one word to describe the evening, it would be "spectacular."

After performing the planned program of music from various Godzilla movies, including the 1954 original, Rodan (1956), Mothra (1961), and others, the band came back onstage for  two-number encore. A vocal number was followed by an incredible version of the original Godzilla theme that built to a rousing crescendo.

I didn't see anyone still in their seat after this final number ended, but if anyone was, I'm sure it must have been due to a medical infirmity.

It was one of the best concert's I've ever attended, and I've seen Bob Dylan, the Rolling Stones, Jimi Hendrix, Janis Joplin and other great musicians perform live.
Posted by Dr. Stan Glick at 1:35 PM No comments: 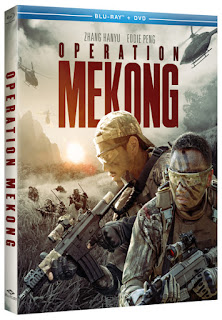 Operation Mekong blasts onto digital today, Tuesday, May 2 and explodes in a Blu-ray™/DVD Combo Pack and on DVD on June 6th from Well Go USA Entertainment.

Synopsis:
A band of elite narcotics officers are sent by the Chinese government to uncover the truth behind the ambush of two Chinese commercial vessels traveling down the Mekong River. When it’s discovered the drugs seized from the ships had been planted by a notorious drug cartel, a multi-country joint task force is assembled to stop the criminals. The road to justice is, however, paved with dangerous and deadly obstacles.

Bonus Materials Include a 6-Part “Making of” Featurette:
-- Uncovering the Truth
-- The Team
-- The Secret Mission
-- The Journey
-- Two Heroes
-- A Force of Nature
Posted by Dr. Stan Glick at 2:30 AM No comments: 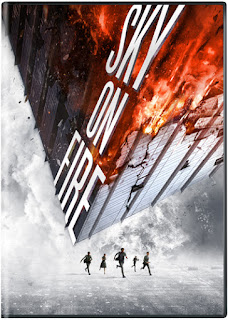 Sky on Fire blasts onto digital today, Tuesday, May 2nd and on Blu-ray™ and DVD June 13th from Well Go USA Entertainment.

Synopsis:
In this driving, non-stop action thriller, the chief security officer at a top-secret medical facility (Daniel Wu) finds himself caught in an explosive battle when a young thief and his accomplices steal a groundbreaking curative medicine. After discovering the true origins of the medicine, the officer must decide whom he can trust to protect the cure from falling into the wrong hands and prevent an all-out war from bringing the city to its knees.
Posted by Dr. Stan Glick at 1:00 AM No comments: 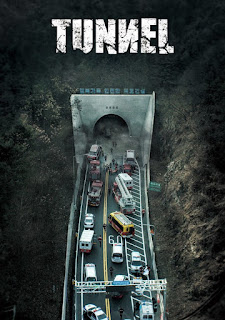 South Korean superstar Ha Jung-woo (The Handmaiden) plays a car salesman fighting for survival inside a collapsed tunnel while rescue workers race against time to free him in the tense, taunt thriller Tunnel, from internationally-acclaimed director Kim Seong-hun (A Hard Day).

With draining cell phone battery power and a rescue effort that might end before they locate him, days pass by without success, and people start to lose hope as the rescue operation becomes an ordeal when incompetence, the media and government interference slow down the process.

When a tunnel collapses on Jung-soo (Ha Jung-woo), the ensuing rescue operation becomes the subject of widespread media coverage and frenzy. But days go by, nerves stretch thin, and Jung-soo must struggle for his life in the suffocating darkness alone.

AsianCineFest Rating: 3 out of 4 stars; a good thriller
Posted by Dr. Stan Glick at 12:30 AM No comments: