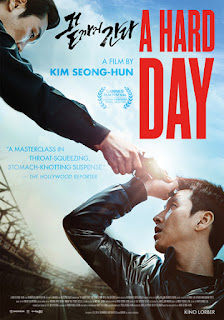 Part crime caper, part black comedy, A Hard Day will be opening on Friday, July 17, 2015 in New York City at the Village East Cinemas with a national release to follow. I recently attended a press screening here in New York and was blown away by this film. I'll be posting a full review next week. In the meanwhile, let's just say you better hope it's playing at a theater in your vicinity. This is one film you won't want to miss!

Homicide detective Geon-soo Go is having a hard day: in less than 24 hours, he receives a divorce notice from his wife, his mother passes away, and along with his coworkers, he becomes the focus of a police investigation over alleged embezzlement.

Making things worse, on his way to his mother's funeral, Geon-soo commits a fatal hit and run and then, desperately tries to hide the accident by hiding the man's corpse in his deceased mother's coffin. But when Geon-soo gets a mysterious call from a person claiming to be the sole witness of the crime, he realizes that someone has been watching him all along.
Posted by Dr. Stan Glick at 1:30 AM