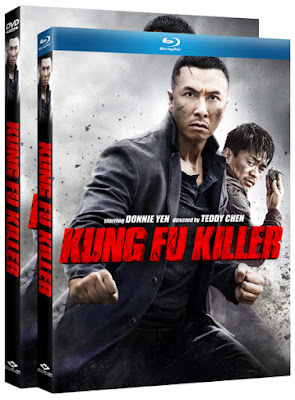 Who's killing the great kung fu masters of Hong Kong?

This (a play on the title of the 1978 comedy Who is Killing the Great Chefs of Europe?) might serve as an alternate title for this terrific martial arts action fest directed by Teddy Chan (Bodyguards and Assassins, The Accidental Spy) and starring Donnie Yen (Special ID, Ip Man and Ip Man 2, with the third installment currently filming), who also served as action director. It becomes available today, Tuesday, July 21st on Blu-ray™ & DVD. (It's already been available on Digital HD since July 7th.)

The film starts with Hahou Mo (Donnie Yen) turning himself in at Hong Kong's Central Police District Headquarters. His face and clothes are bloody and his right eye is bruised, swollen and closed. (This has to be one of the most unflattering movie entrances ever.) Seems he's killed someone.


Three years later he's in prison serving the five-year sentence that was handed down. There's a report on television that Mak Wing-yan a master of boxing, has been beaten to death. Hahou is certain that this is the first of what will be a series of attacks on the city's leading martial arts proponents.

He manages to speak to Chief Inspector Luk Yuen-sum (actress Charlie Young, seen in the Pang Brothers' 2008 English language remake of Bangkok Dangerous and in Seven Swords, 2005) and names several martial arts masters, one of which he claims will be the killer's next victim. Luk's skeptical at first, but as events proceed as Hahou claimed they would, she arranges for him to be temporarily released in police custody with the understanding that, if he is truly helpful in solving the case, his remaining prisons sentence may be shortened.


The serial killer continues to work his way through various martial artists, defeating each by using their own specialty against them. Having started with fists against the boxer, he goes after specialists in kicking, grappling, and weapons. In each case Hahou and the police are just a bit behind the murderer, who manages to get away from them in one instance.

Hahou's motives become suspect when he takes off with telling the police and returns to his hometown of Fo Shan. There he reunites with Sinn Ying (Bai Bing, As the Light Goes Out, Shaolin). She is the romantic interest for Hahou, and has kept his once famous martial arts club going in his absence.

I had a good feeling about this film when I watched its trailer. That's not always a true indicator of how good a film is in its entirety, but in this case it was. Kung Fu Killer is an outstanding action film, one of the best I've seen in recent years.

Bonus features include a four segment "Making Of" featurette and the film's trailer.

AsianCineFest Rating: 3.5 out of 4 stars; very good, highly recommended. This one's for owning!
Posted by Dr. Stan Glick at 1:30 AM