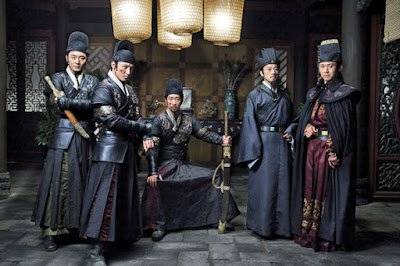 Brotherhood of Blades, is a period action film directed by Lu Yang (My Spectacular Theatre) that is set in China in the 1620s during the late Ming Dynasty. It is being shown this Saturday afternoon as part of the 14th New York Asian Film Festival.

Wei Zheongwian, the Head Eunuch and Head of the Imperial Assassins had effectively ruled the Imperial Court for eight years because he was supported by seven out of ten of the Court's highest officials, the so-called "Eunuch Clique." Young Emperor Chonzhen relieved Wei of all official duties and banished him to the remote outpost of Fengyang.

Three Imperial Assassins are tasked with arresting all members of the clique and killing Wei. Shen Lian (Taiwanese actor Chang Chen, who played the bandit Lo, or 'Dark Cloud,' in Crouching Tiger, Hidden Dragon) is the main character of the three. Lu Jianxing (Wang Qianyuan, The Golden Era) is the most mature and self-sacrificing, but he is also eager to be promoted. Jin Yichuan (Li Dongxue) is the youngest and is vulnerable because of a secret in his past. He is also sickly, with a persistent cough. These three Jinyiwe, as the Secret Police of the Imperial Guard are known, have a close bond. Together they form the Brotherhood of Blades. In corrupt times, when betrayals and corruption among seemingly all officials are rampant, they steadfastly stand by one another and try to achieve their individual goals.

As stated, Jianxing wants to be promoted. Shen Lian wants to buy the freedom of Miaotong (Liu Shishi), a courtesan, for reasons that eventuality are revealed, but he cannot afford to do so on his meager salary. Yichuan is extremely fond of Zhang Yan (Ye Qing), the comely daughter of the doctor who is treating him.

I felt that there were some weaknesses in the plot, which is also a bit convoluted. But that's not all surprising when eunuchs, corrupt officials, and betrayals are involved. The action scenes are pretty decent all-in-all.

I think the main problem for me, aside from the plot issues, is that I didn't really care that much about any of the three members of the Brotherhood. I mean, they're just not nice people, they do some really bad things, and the good that's within them -- at least as depicted by the script, of which director Lu was a co-writer -- just didn't redeem them sufficiently in my eyes, mind or heart. It's much like the problem I had with The Guillotines.

AsianCineFest Rating: 2.5 out of 4 stars; fairly decent, but nothing to rave about.

For a more positive take on the film, check out the review by Ric Meyers, my former fellow-columnist at Asian Cult Cinema magazine, at the end of his post Martial Arts in Media Winter 2015.
Posted by Dr. Stan Glick at 12:30 AM