South Korean crime thriller FOR THE EMPEROR will be available tomorrow 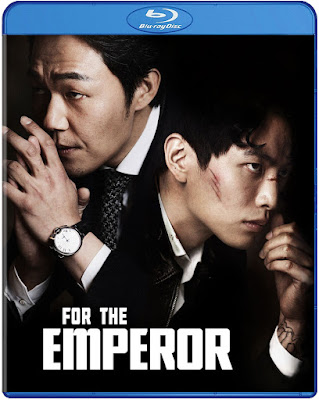 LEE Min-ki (Shoot Me in the Heart, Haeundae) stars as LEE Hwan, a professional relief pitcher who is kicked out of baseball for rigging games. He becomes a gangster, working for "Busan's Big Boss" JUNG Sang-ha, nicely played by  PARK Sung-woong (Shadowless Sword, New World). Providing some hot female presence is LEE Tae-im (S.I.U.) as Madame Cha, who runs the "Temptation" club. Her sex scenes are definitely hot and torrid.

Hwan initially is involved with collecting debts, but later rises through his expertise in gambling. There is a plethora of violence, especially of the multiple stabbing kind. Hwan is particularly vicious, belying his very slender build. He's also extremely ambitious.

There are many plot twists, which can make the proceedings a bit difficult to follow at times. Not that this matters; For the Emperor is a simple, serviceable and enjoyable gangster film, not a Godfather want-to-be. It's also quite stylish and visually appealing.

AsianCineFest Rating: 3 out of 4 stars.