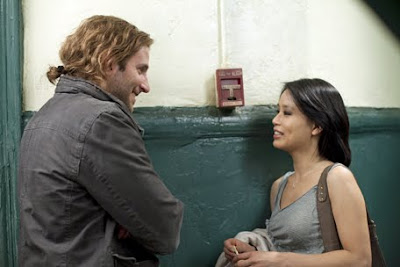 Cooper, whom I first saw in the television series Alias, but who's more recently begun breaking out in films such as The Hangover and The A-Team, plays Eddie Morra, a would-be novelist who begins taking a pill that's still in the testing stage. Turns out, it enables him to tap into the 80 percent of the human brain that normally lies dormant and in reserve. Eddie's newly acquired super intellect leads to wealth, power, and all the accouterments that come along for the ride. De Niro's character is Carl Van Loon, a corporate tycoon who has understandable interest in Eddie's abilities and their potential usefulness in Van Loon's business enterprises.

T.V., who is currently starring as "Arachne" in the Broadway production Spiderman: Turn Off the Dark, plays Valerie. I don't know the specifics of her character, but I understand that T.V. shares some intimate screen time with Cooper.

In Entertainment Weekly magazine, Lisa Schwarzbaum just gave the film a B+ rating (Issue #1147, March 25, 2011, pg62). So I'm feeling pretty confident that LIMITLESS is going to shape up as a fine thriller and a solid box-office hit. Glad that T.V.'s a part of this and I'm looking forward both to watching the film and seeing her performance.

Read more about TV Carpio in my earlier post by clicking here.
Posted by Dr. Stan Glick at 1:01 AM