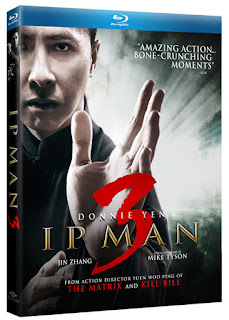 Ip Man 3, the final entry in the action trilogy directed by Wilson Yip and starring Donnie Yen, debuts today, Tuesday, April 19th on Blu-ray™ and DVD from Well Go USA Entertainment. (It has been available on Digital HD since April 5th.) My review is based on watching the Blu-ray version.

The Ip Man collaboration of action star Donnie Yen and director Wilson Yip began with Ip Man in 2008 which was followd by Ip Man 2 in 2010. The Wing Chun master was also the subject of two films by Herman Yau, The Legend is Born: Ip Man (also 2010) and  Ip Man: The Final Fight (2013) and of Wong Kar-wai's The Grandmaster (also 2013). 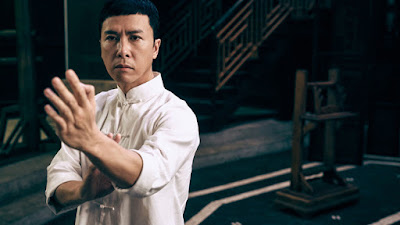 Beginning in Hong Kong in 1959, Ip Man 3 finds the titular character facing two opponents. One is Frankie, a ruthless real estate developer played by Mike Tyson (! More on that later.) He sends his minions to "convince" the principle of the school that Ah Ching, Ip Man's younger son, attends to sell him the property. Led by Ma King Sang (Patrick Tam) they use any and all means to achieve their assignment, including beatings, setting fires and kidnapping children. As a result Ip Man and his students guard the school.

Ip Man's other opponent is Cheung Tin-chi (Zhang Jin), a rickshaw driver whose son also attends Ah Ching's school. Cheung is also an expert in Wing Chun. If I understand the genealogy correctly, his teacher and Ip Man's teacher both studied with the same master. Because of differences in the Wing Chun of their two teachers, Cheung is convinced that his is the true, and therefore superior, Wing Chun as compared with Ip Man/s

There are plenty of fine action scenes, which is what one would expect with Yuen Woo-Ping serving as action director and Donnie Yen and Yuen Shun-Yee serving as action choreographers. We're talking numerous fight scenes of both the one-against-many and one-on-one variety. There is staff fighting, knife fighting and unarmed combat.


Before it opened theatrically this past January, I watched an online screener of the film. In my initial review of Ip Man 3, I was bothered by the gimmick of using Mike Tyson, who's billed in the credits as a "Special Appearance."  I must confess that I was put off because Tyson is a convicted rapist and because of his biting Evander Holyfield's ears in their second fight. (See the entry on  Tyson in Wikipedia if you're not familiar with these events.)

Furthermore, I found the idea of a black man with a huge facial tattoo as a ruthless real estate developer and promoter of an illegal fight ring in Hong Kong in 1959 rather ludicrous. Not even his being protected by the other "foreign devils" (i.e., the British) can make this remotely believable. However, on re-watching the film, I found myself more accepting of his presence. I also must say that I was amazed by how well spoken and articulate Tyson was in his solo interview in the bonus features. I was blown away by his description of the Shaw Brothers' film Crippled Avengers (1978). 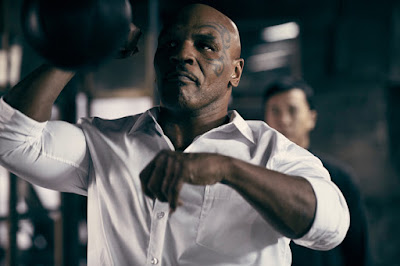 Another problem I initially had with the film concerned the two main fights, the first with Ip Man against Tyson, the second with him against Cheung.  Both end in what I considered a lame and unsatisfying manner, as if the film was promoting political correctness, or maybe that should be "kung-fu correctness." I still feel that way, though was less bothered by it on my second viewing.

My final problem was that the film does a real number in putting down Bruce Lee. This is not the first time this has happened in a recent Ip Man movie (see Herman Yau's Ip Man: The Final Fight), but it's pretty harsh here. Fortunately Bruce is slightly redeemed by his teaching Ip Man how to dance so he can please his wife, Cheung Wing Sing, again played by actress Lynn Hung.

If it's action you're after, Ip Man 3 will totally satisfy you. The disc also offers real value in terms of the bonus features.