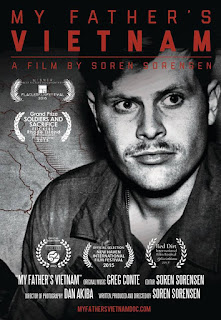 My Father's Vietnam, an award winning documentary by first-time filmmaker Soren Sorensen, is being released today, May 24th, on VOD and across all other digital platforms by Gravitas Ventures.

The film had its genesis in a visit the Sorensen family made to Washington, D.C. when Soren was a child. Peter, his father, made pencil rubbings of two of the names on Maya Lin's Vietnam Veterans Memorial and was clearly emotionally distraught. It was not until Soren was in his thirties, however, that he was able to ask his father about his experiences while serving in Vietnam.

In the fall of 1969, shortly after marrying, Peter began his tour as a combat engineer. He was fortunate to be reassigned to the U.S. Army's 31st Public Information Office in the spring of 1970. The names he made rubbings of were of two men Peter knew well and who did not make it home: Loring M. ("Ring") Bailey, a foot soldier, and Glenn Ricker, a helicopter pilot.

The film features interviews with Soren's father, mother and sister, with Ring Bailey's father and brother-in-law, and with men who had served with Bailey and Ricker. The "talking head" shots are complimented by some never-before-seen photographs and 8mm footage of the Vietnam War, the later largely made by Ricker from his chopper.


My Father's Vietnam is a touching film that looks at the cost of the Vietnam war at an intimate and personal level. Born in 1948, I was an early "baby boomer." I was in high school and college as the war expanded and went totally out of control. Thus, along with the Civil Rights Movement and the Counter Culture, the Vietnam War was one of the defining aspects of my youth. I found Soren's approach fascinating and engrossing, since he never experienced the daily body counts on the evening news programs, nor the way the war seemed to be rendering the United States asunder.

For me the film is probably one of the three best about the Vietnam War. Hearts and Minds (1974), the winner of Oscar for Best Documentary Film, looked at it from a macro-cosmic point of view. Francis Ford Coppola's Apocalypse Now (1979) used the plot of Joseph Conrad's Heart of Darkness to vividly bring to the fore the war's madness and incomprehensibility.

My Father's Vietnam, which won the Soldiers and Sacrifice Grand Prize at the 2015 Rhode Island International Film Festival (RIIFF) and the Best Picture Documentary at the 2016 Flagler Film Festival, tackles the war on a micro-cosmic level, bringing home the impact of the war on the lives of one soldier who survived it and of those who knew and loved two servicemen who didn't.