Stylish Crime Thriller WHO KILLED COCK ROBIN is coming to DVD and Blu-Ray on October 15,2019 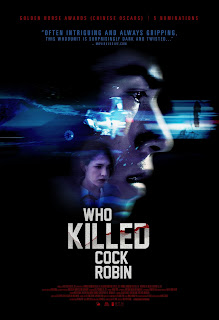 Fans of acclaimed filmmaker Cheng Wei-hao’s recent work on The Tag-Along movies may take a liking to the subliminal poetry that coalesces in the grim, horrific milieu of his latest thriller, Who Killed Cock Robin which is coming to DVD and Blu-Ray on October 15th, 2019.

Hand-held cinematography goes hand-in-hand with Cheng’s vision as it takes a life of its own, loosely iterating its own incarnation of an old English poem with a narrative aptly suited for the film’s title; More than a murder mystery, Cheng unravels a tale of sex, greed and malfeasance drenched in a mystique of rainy weather and dour blue filters with a dark tint that almost never lets up. ……

Needless to say, if you’re compelled to watch Who Killed Cock Robin a few more times, it wouldn’t be too much of a task. Cheng crafts a nimble story of murder and mystery that elevates into something far more consequential, mesmerizing and transformative in its own way.

Who Killed Cock Robin is a tale ripe with a number of suspense and horror tropes with a touch of sex and corruption thrown in the mix. Enthralling and stimulating in its pulp-style character development, the film recapitualtes with an ending only as cathartic as you’ll allow yourself to feel given that the imagery in the third act is not for the faint of heart. br /> br /> All in all, Cheng’s newest offering is one of the wildest and scintillating psychological thrill rides you’ll ever sit through, and after a few breaths, you’ll be back for seconds just to make sure your head is still on straight.

In this delicately scripted gut-wrenching psycho-thriller from award-winning filmmaker Cheng Wei-Hao (The Tag-Along), an ambitious journalist who witnessed a hit-and-run years ago reboots his investigation led by newly emerged clues. As he beats the clock to save the only survivor after her sudden disappearance, layers of unimaginable dark truths around a corrupted system start peeling.
Posted by Dr. Stan Glick at 12:30 AM