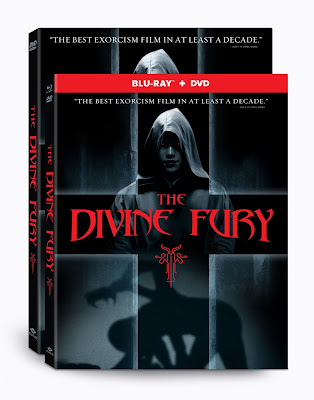 After suffering two terrible losses in his youth, Yong-hu (Park Seo-joon) abandons his Christian faith and chooses to only believe in himself. As an adult twenty years later, Yong-hu has become a champion MMA fighter and has everything he has ever wanted, that is until a mysterious wound appears in the palm of his hand. Somewhat reluctantly joining forces with Father Ahn (Ahn Sung-ki), an exorcist, Yong-hu finds himself in the middle of a dangerous fight against otherworldly evil forces seeking to wreak havoc on the human world.

It's been over forty-five years since William Friedkin's The Exorcist (based on William Peter Blatty's 1971 novel) scared the bejesus out movie-going audiences with its depiction of the demonic possess of a young girl. The Divine Fury places more emphasis on the fight against "The Dark Bishop's" demons than on the horrific effects on those possessed, though there are some pretty frightful scenes of those afflicted.

For me personally, part of the enjoyment of watching The Divine Fury was due to the starring role of Ahn Sung-ki. Several years ago, I had the pleasure of attending a luncheon for him that was sponsored by The Korea Society of New York City. I wasn't that familiar with him at that time, but had read about his career. He was quite pleased when I told him that I had the impression -- if he didn't mind the comparison -- that he was rather like the Tom Hanks of South Korea. One of my day-job co-workers attended the event that evening that Ahn was in town for (I wasn't there) and told me that he repeated what I'd said and had even asked one of his hosts what my name was. Lovely memory for me.

Aside from that, the film is definitely well-worth watching. It puts some different spins on the theme of demonic possession and has some fine special effects.

Finally, let me mention that there's clearly a sequel planned that will focus on Father Choi, a young priest and secondary character in The Divine Fury played by Choi Woo-sik (Parasite, Okja, Train to Busan).