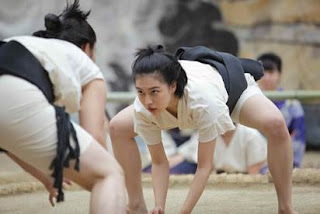 Like cinema, sports have been integral to the development of modern Japan since the late 19th century when the country opened its borders to the West. Intersecting these two major cultural forces is the multifaceted and ubiquitous sports film, a fluid genre that offers fascinating insight into issues related to Japanese national identity, gender roles and the clash between tradition and modernity. Organized in anticipation of the Tokyo 2020 Summer Games, Aim for the Best: Sports in Japanese Cinema celebrates the Japanese sports film in its myriad iterations—covering a wide range of athletic disciplines and filmmaking styles, from wartime Japan to the present—including classics, documentaries, anime and commercial crowd-pleasers.

The series opens April 10th with a 35mm screening of Masayuki Suo’s award-winning sports comedy Sumo Do, Sumo Don’t, about a mismatched group of outcasts brought together to participate in a dysfunctional college sumo club, followed by a post-screening Sumo Party with chankonabe (a hearty stew commonly eaten by sumo wrestlers), drinks, and a sumo demonstration. One of the uniquely Japanese sports disciplines with premodern origins highlighted in the series, sumo wrestling is also central to The Chrysanthemum and the Guillotine, a contemporary period epic by the prolific auteur Takahisa Zeze that focuses on the little-known history of women’s participation in the sport. Other titles involving Japan’s domestic sports include Akira Kurosawa’s debut feature Sanshiro Sugata, a judo film made while the country was still at war, and Kenji Misumi’s The Sword, a postwar classic about kendo starring Raizo Ichikawa adapted from a story by the infamous author Yukio Mishima, both screening on imported 35mm prints.

Other highlights include Koshien: Japan’s Field of Dreams, Ema Ryan Yamazaki’s perceptive and richly dramatic documentary about Japan’s wildly popular high school baseball tournament Koshien, which serves as a microcosm for Japanese society as a whole—followed by a Q&A with Yamazaki. Koshien is also the subject of the rarest film in the series, which is the 1968 documentary Youth: The 50th National High School Baseball Tournament by legendary director Kon Ichikawa. Long unavailable and relegated to mythical status among Ichikawa completists, the film screens for the first time outside of Japan on April 25th as the final event of the series. Another recently unearthed discovery is Tokyo Paralympics: Festival of Love and Glory, a fascinating document of the 1964 Paralympic Games that was newly restored this past year, making its International Premiere.

The series is rounded out by the recently remastered tennis anime feature Aim for the Best!, adapted from a popular manga and anime series inspired by women’s athletics; biting satires about baseball scouting and capitalism in sports—Masaki Kobayashi’s I Will Buy You—and the manufacturing of sports stars through advertising—Seijun Suzuki’s characteristically eccentric golf film A Tale of Sorrow and Sadness; the synchronized swimming audience favorite Waterboys from hitmaker Shinobu Yaguchi; and two free events: a talk by Dr. Robin Kietlinski contextualizing the history of modern sports in Japan through the lens of gender and social issues, and a free screening and talk presentation of the pilot episode of the NHK “taiga drama” Idaten, about the history of Japan’s involvement in international sports and the Olympics.

“With the Summer Games in Tokyo on the horizon, this is a perfect opportunity to consider the longstanding tradition of putting Japanese sports on the big screen,” says K. F. Watanabe, series curator and Deputy Director of Film at Japan Society. “From sumo to baseball, the intersection of sports with Japanese cinema offers rich insight into some of the most salient issues in Japan’s modern history, including how sports have served to define its social and political values as a compromise between tradition and globalizing change.”